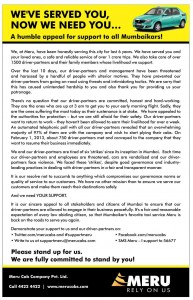 Time for flashback. When Meru started operations back in 2007, we Mumbaikars were completely at the mercy of the city cabs (referred locally as kaali-peeli). Hyper-inflated bills, rowdy behaviour, rash driving, and others were all the calling cards of the kaali-peeli. Commuters were helpless in front of these cab-wallahs, who ran according to a writ of their own. In this mire, appears Meru, a professional run-taxi operator, that delivers a swanky sedan at your door, with a civil driver and a mechanism to ensure no over-charging. While over the years, Meru added a lot many features to their cabs, like web-booking, credit-card payment, etc., the earlier 3 were its only USP. END_OF_DOCUMENT_TOKEN_TO_BE_REPLACED