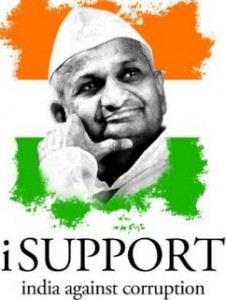 Also, I am a wee-bit surprised that according to you, Gandhi never went on a fast unto death by refusing me 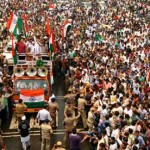 dication. Because over the years, our education system has created an impression that Gandhi used Satyagraha as a potent political weapon, of which fasting was an important tool. In fact, even in the Attenborough film on Gandhi, I well remember the scene towards the climax, when see the post-partition riots, Gandhi went on a fast much against wishes of Nehru and other leaders. He persisted with it till he was convinced that the riots would stop. Probably, it was a cinematic liberty taken by Attenborough.

But even so, while scanning the Web, I found this entry on Wikipedia, which might be of interest to you (even though one can’t vouch for it):

Gandhi undertook a “Fast unto Death” on three notable occasions:

So, your claim surprises me. Probably, being not as well educated as yourself, my own understanding could be flawed. Or, as I think, the phrase “by refusing medication”, is like the asterix mark on those Sale Adverts, namely, conditions apply.

I also feel that you are overstating things a bit, when you bring in Dr. Ambedkar, the great constitutionalist, and his “grammar of anarchy” theory. Because, this is not the first time, such a mechanism is being used in India. Over the years, right from campaigning for linguistic states, or even getting RTI implemented, people and groups had to resort to such means to get their say. Though, I am not a great admirer of such fasting (considering my gait, I can barely not eat for a few hours), yet I admire a person, who stays true to his conviction for 10 long days.

If you look around, Anna isn’t the only one that is striving against the government, we even have the Maoists and the Naxals movements that in some way represent the anguish and the deprivation of the masses. When you compare, Anna’s peaceful means (adopted from Gandhi, again), I feel that it is much preferable than all the rest. Years, back, did not Lok Nayak JP, prescribe something similar, when he felt that the then government in power (led by Indira Gandhi) was against the people and needed to thrown off.

Anna, has so far, not wished or recommended on the lines of JP’s non-cooperation. He is very smart, b 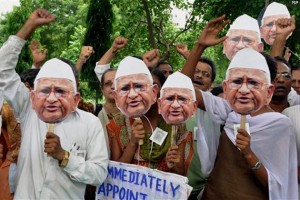 y torturing himself, he is torturing our conscience, which has been in a sort of comma for so long. After all, when you see a 74 year old man, starving for the sake of all, it is hard for your meal to pass down the esophagus. That is not in our culture, that is not how we deal with elders.

BTW, your worry that the gherao of homes of MPs, “encourages an anti-politician ‘sab neta chor hai’ rhetoric that could further destroy faith in parliamentary democracy”, is a wee-bit strange. Because thanks to channels like yours, that through the day and night keep bombarding us about one scam or other, we have come to regard all netas as ‘chors’. And when there is no news, you have panel discussions, where eminent social butterflies berate the politicians, and finally, you let a whole lot of audience in your studios and let them loose on the politicians in your chat shows. Has not all that stuff made us cynical? When after a bomb blast, or rail accident, your reporters thrust their “branded” mics in victim’s faces, and you air the anguish and pain, does it not destroy our faith? Have you not realized, that over the years, the reason the educated and aware in India has become disillusioned with politics and politicians is because they are now well aware about how they function. Much of the credit goes to channel like yours that have taken the onus of disrobing powerful people in full public view. The world has changed much after the Tehelka days Rajdeep, and am sure, you are much more aware of it than I am.

Coming back to your note to Anna, am sad to know about how your colleague was assaulted by a drunk biker gang. To be honest, Delhi is a much difficult place for women, isn’t it? So many rapes and so many attacks happen, that nowadays, you feel thankful that it was merely an assault and nothing more. By the way, Anna caps and T-shirts are available by the dime and dozen, and if some arseole would wear it and commit a crime, would you link it with Anna’s movement. Is it justified, you tell me?

Your fear that the movement could transform into mob fury is genuine and I too share the concern. But more than that, should we not appreciate, that even after 11 days, so many people have flocked to so many rallies, across so many cities, and yet not a single incident of vandalism or rioting has been reported. Does not that amaze you? Probably, we Indians are also capable of being sensible and sane, it is just that we never got a guidance of how to be so. Anna might have shown us the way. Let’s try and look at the positive at times. You mention Abu Salem’s girlfriend Monica Bedi as a TV spectacle, but then there are millions others who are wearing Anna cap and roaming the streets waving the flags. Why don’t you or the likes of you, capture and show that? Exactly, who is turning this into a spectacle, I am not able to know. Is it Anna or the TV wallahs?

I am also glad that you understand and kind of appreciate the reason, why Anna is wary of leaving the fast, before the primary goal is achieved. Right now, he has been able to create a wave, he has to ensure that some concrete steps are taken, so that all the people that are rallying around hi 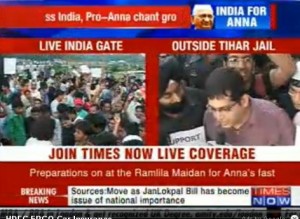 m have faith, not only in him as a person, but also the means that he is making them adopt.

And yes, as you mentioned, there is little trust for a government that speaks with many mouths. Not only have they acted wantonly, but they also speak in almost contradictory terms, some hailing, some belaboring, some chastising, some sermonizing, some threatening, some softening. There are so many divergent views, that it is hard to pin-point on one aspect. Is this not the reason, why even Congress wallahs don’t know what their party stance is.

How can we now trust the word of the government, when it has reneged so many times on it? Take for instance the Standing Committee that is looking into the Lokpal Bill standing committee, which has members like Lalu Prasad Yadav, Amar Singh, Ram Vilas Paswan, politicians who themselves are steeped in corruption. Do you genuinely even for a moment think that such people will let the bill through?

There is a saying from, where my roots lie, “Ganga par ki, aur kinare pe doob gaye“. The movement is close to culmination, the end is near at sight, but mistake not, this is not the end. Loosening up now, will be calamitous. Please do allow me to use a cricketing analogy, and considering your lineage and your personal interest in the game, you might agree with me. Right now, Anna is batting on 99, just a run away from century. Don’t you think that a batsmen at this moment needs to be more cautious and ensure that that piddly one run is taken. So, many batsmen have failed get that one single run, when they could get those 99 runs. Why? Because they eased up.

Anna should not ease up now, not until some concrete action is taken. Take for instance, after so many hue and cries, today Rahul Gandhi, spoke about making the Lokpal a constitutional body

Post-script: I am a journalist like you and much concerned like you are about the way things are going. Let’s not bother about things like personality cult, so along as we have a goal in place. BTW, aren’t we mango people, all the time obsessed with personalities, be it Tendulkar, Rajni, MTR, or Anna at the moment. We need heroes all time, so what’s wrong if the current one is a 74 year old ‘tireless fakir-like crusader from a Western Maharashtra village”. Is there harm?

One thought on “An Open Letter to Rajdeep Sardesai”