“Come on, of course you have to do it. Everyone who comes to Bhutan has to do it. It is like almost mandatory,” is basically how Dawa Penjor, the CEO of Bhutan Media Foundation, reacted when I told him that I was giving Tiger’s Nest a miss, especially as ‘I hate trekking’. There was a look of incredulity on him, like I was planning to not see Eiffel on the visit to Paris, or miss the great Pyramids while visiting Egypt. Similarly, I guess, missing Taktsang (Tiger’s Nest) is just not an option in Bhutan.

Thankfully, Dawa moved from incredulity to encouragement, and went on to soothe my frayed nerves that had started jingling at the very prospect of a climb up the mountainous path. “Don’t worry; you will surely be able to do it. After all even 70 year-olds are known to have climbed up the hill, pretty easily,” was his winning argument. It was only later that I 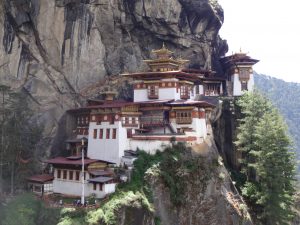 realised, that “70 year-old” was more like a placebo for hassled nerves.

Nonetheless, I took the bait, and then our common friend Sonam Gyambo tinkered with my itinerary to fit in the one-day trek in the two days that I was left with in Bhutan. A phone call to his friend in Kicchu Monastery — whom he referred to as a healthy monk, and then we were all set for a climb up the hill. From skipping Taktsang to setting out to visit it, I had made a big leap of faith in a matter of few hours.

My reservations against Tiger’s Nest were not without reasons. You see, I am certainly not in the best of physical frames. The last time I had stood on a weighing scale, it groaned itself to some 3 digit number. Secondly, I am certainly not the trekking types; I more like the loaf-wander-drifter types. I loathe the very concept of those trekkers whose only aim is to quickly reach a point, take some selfies, preen and quickly descend. I am more likely to contemplate on a silly lily, or admire an ant-hill. I hate the rush in life, and I detest it more so on those scenic beautiful mountains. After all, “what is this life full of care, we have no time to stand and stare”, and I love to stand and stare without a rhyme or a reason.

And then, when I saw the pictures of Tiger’s Nest from a trek-able purview, I knew it would be stretching myself to an impossible scale. The last trek, I had undertaken was more than a decade back and here was a monastery that challenged you from an edge of a cliff, 3000 metres above sea-level. Nah let the tiger (or tigress) rest peacefully there. I had no intent to disturb it at all.

Anyways, on my last day in Bhutan, I was down there in the Paro Valley, with the healthy-monk to guide me to the top, and my better-half and two sons to inspire me to the there. On the first glimpse of monastery, as a tiny little white dot stuck afar into the green hill that stood rather tall, I knew it would not be an easy task. And how right was I. 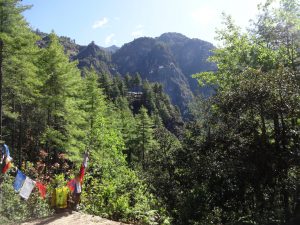 We were there at the base by around 7.30 am, after parking the car, we started on the route. It was a dusty hilly road, and immediately, it started up. At the start you could hear the horses grunting, possibly doing some horsey pranayam in preparation for the taxing climb ahead. For a moment, I was much tempted to load myself on a horse, but our monky guide was firm, and dissuaded me from it. Believe me; very shortly I would be cursing him for it.

Just about 30 minutes into the climb, my pace had dropped considerably and I was huffing and puffing badly. To save myself from embarrassment and also to not drag the others back, I requested the lot to move ahead, promising them that I would catch up soon. The kids were unaffected by the incline and bounded on their way to the top with the monk and another friend. Meanwhile, the better half was perturbed as well, but she was doing better than me. I asked her to move ahead as well, so that I will have some inspiration to move on. She reluctantly agreed but even that didn’t seem to work.

It must have been an hour and as I dragged myself grudgingly up the road, my condition seemed to get progressively worse. I would walk for 5 minutes and then for the next 15 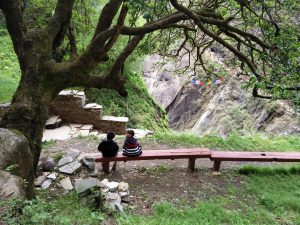 minutes, I would be catching up on my breath. In between, there would be all those horses with those relaxed riders would pass by, and I would grunt in dismay. Why did I ever listen to that monk, is what I grumbled. As the sun gained strength as it made its way across the sky, the going seemed to go tougher.

But then, I was not alone. There were a lot many others from all across the world, climbing up the path to the monastery. The fitter ones would move ahead and pass by, but the not-so fit ones (like me) were moving in a sort of pack. We all were struggling, and the struggle seemed to make us aware of each other.