Swimming when you do it for leisure is pretty harmless. In fact, it is a good and healthy vocation for the body and the mind. But, when it is taken as a sport, it kind of transmutes into something else. Swimmers seem like a different species altogether. They are focused, private individuals who are interested in just three things: swimming, eating, and sleeping, not necessarily in the same order. In that way, swimming as a sport is something quite 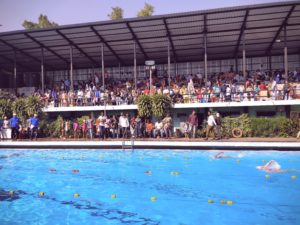 different, it is an abiding passion that not only sucks in the sportsperson but also their folks, their parents.

Sometime between when the kid is practicing in pools and participating in local meets, a strange transformation takes place with the parents. At some ill-opportune moment, they transmute from normal fun-loving folks to an obsessive passionate lot. Called as the Swimming Parent (a Swim-Dad or a Swim-Mom), these are pretty normal beings most of the times but shows traces of abnormalities in the proximity of a water-body like a swimming pool or a sea. Abnormalities include garrulous or loud behavior, a fascination for trivialities like splicing or leg movement, and obsession over lap-times. The inflicted one is not shy and inhibited in showing his/her excitement or disappointment to the world at large. At meets, the Swim-Dad can be seen nervously timing the different heats and thunderously timing the ones that have his kids. Usually, he or she does not swim yet, knows the nuances of each stroke. He or she is well aware of dietary practices even though their body might not reflect it. He or she is obsessed with timings, records, and tournaments. And usually is not much liked by officials and coaches. 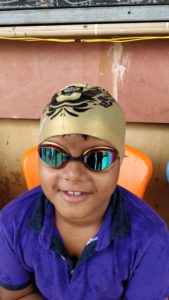 The good thing is that, once away from the pool, the Swim-Dad displays normal tendencies, but now and then, some mutations occur and the Swim-Dad is equally obsessive even in while sitting in the living room.

To know whether you are afflicted by the syndrome, here’s a list of statements of the primary traits. Count how many the number of traits that you agree with and then compare it with the result at the end. So, let’s find out if you are a Swim-Dad (or a Swim-Mom). Here goes:

If keeping records of your kid’s performance is your favorite hobby, or better, your only hobby

If you go to meets armed with your camera, clipping all races for posterity END_OF_DOCUMENT_TOKEN_TO_BE_REPLACED

“Ok God, if I cross that line before that car does, you will add 20 years to my mummy and papa’s life. Done!,” Mumbling something like this I would dash full speed ahead, trying to cross an imaginary on the street before the car coming from the front does so. To be honest, the line was always drawn in a manner which would be a trifle hard to attain but with a certainty nonetheless. Also, the opponent car would be selected with care, the slow-poke stuttering Fiats and Ambassadors would be preferred over the flighty Marutis. Not surprisingly, I would win almost all the contests, crossing the line, winning the race and yes, adding years to my parent’s lives.

Though I am not too sure as to when I started playing this game, it was surely when I was less than 10. I guess, there’s something about that age when we suddenly become 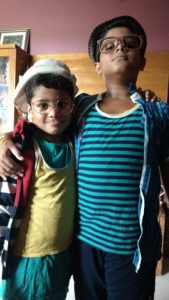 conscious of mortality, about life, death and the things beyond our control. We see birds dying, people dying sadly in films and on TV, we hear about the deaths of some far-off uncles and aunties, and then there are these absolute strangers that die up in some conversations, that were snatched away by  the pot-bellied Yama in some accident, disease, crime, or just about anything. Sadly, the blissful reverie and the innocence of childhood is besmirched by the burly god of death riding his dark buffalo to the underworld. It is at this age that it dawns upon us that life is a balloon that can be punctured by the prick of death. La Vita, is not necessarily and not always, est Bella.
The vulnerability is acute when it comes to our parents. Somehow the majority of the people dying seem to be strangely of about the same age as that of the mum and dad. In fact, the very thought of a lifeless dad or mom can absolutely ruin the fun and frolic much common to that age. We do realize that the parents are pretty crucial, as providers of course, to our existence. They buy us gifts, they give us food, new clothes, fees, toys, and other things. And though they can be pretty irritating with their lists of dos and donts, they are like a protective shield around us, saving us all the times from the big bad in the world. In a manner of speaking, parents are a necessary evil for our existence, like that sour medicine that spoils the taste but makes us healthy nonetheless.
Even the fairy tales are replete with instances of how terrible life can be without parents. I mean look at poor Snow white who lost her real mum, or for that matter Hansel and Gretel who were almost cooked to a curry because of their step-mum.  Or the reason why the big bad wolf was able to gobble down Red Riding Hood was because she had no mum and dad to take her care. You see, in almost all the fairy tales, the misery for the kids is beset by the death of a parent, most often a mother that is replaced by a wily step-mum.
Such tales kind of underscore why we kind of need our parents at that age, and why we are so interested in them living out long — often very very long. 100 years to be the very minimum!
It is the interesting conversations that I have with Idhant and Vihaan that reminds of my childhood dash that helped me to add continuous years to my parent’s lifeline. Invariably, any discussion that even has a hint of death and tragedy ends up with a discussion of how long we both (dad and mom) will live. Numbers are thrown up, calculations are done, and then a figure is arrived at.  At present, as per the current negotiations, we are supposed to live at least a century, a number of 150 years is not all that undesirable either.