“Why should there be any purpose at all, can you not enjoy the canvases for what they are, rather than what they represent,” said a rather chaffed looking Gajanan Kabade. I had decided to pay a visit to his exhibition at the prestigious Jehangir Art Gallery. His show, titled Tapestry, was a representation of artworks that were all dabbed in myriad hues. The unique thing about Gajanan’s work is his use of the ever-common, ever-ubiquitous cello tape. By using overlapping tapes, and paints, he creates a pattern that is much pleasant to the eye, even though it represents nothing. And that was precisely what he wanted to 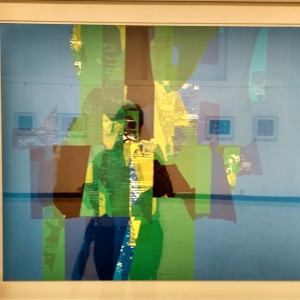 convey to me, when I asked him to explain the “logic”, the “meaning”, of his artworks. “Why can’t you accept and enjoy the abstract for what they are, without trying to place them in a context?” Gaja asked me, though it seemed more like an advice or a complain.

Honestly, this was the second time in my life I had come across such a scenario, where my creative mind struggled to comprehend the abstract. It was some 15 years ago, when one evening a rather generous editor of Free Press Journal, called into his cabin a rookie reporter with long tresses and passed on him an invite to an exhibition of paintings by the celebrated Jehangir Sabavala at the Jehangir Art Gallery. “It will be very interesting for you boy,” said Gonsalves gesticulating with his hand on which was adorned a tribal band of various hues. And so, thinking it to be an arty soirée where costly wine will flow along with crusty croissants, I merrily landed at the Gallery. This was to be my big debut in the esoteric world of art. My brief encounter with the octogenarian artist did not really turn out to be a charm, as the moustachioed man possibly expected a more knowledgeable bloke from FPJ, not a greenhorn like me. Nonetheless, I did not let such incongruities distract me from the task at hand, and after badgering the artist with some terribly mundane queries, in response to which he merely muffled a grumble, I got to the task at hand. Also the fact that there were no waiters carrying platters of veggie snacks, nor was there the associated tingle of half-filled glasses, seemed to nudge to do something worthwhile, something which not many journalists are not known to do.

I looked along the room, it was full of those high-society peoples, you know ladies in clinging shiny chiffons, and bearded men in silk kurtas. There was much chatter all around, and the grandfatherly artist moved in the Gallery like a matador who had just killed a bull. Now and then you could discern a sudden explosion of an orgasmic sigh that went like “ohhhhhhh…” It would invariably be followed by silence and then there would be a few more sighs and then silence again. Steadily, the whole room was filled with such orgasmating creatures, especially the female types. Was frankly bewildered at such sighs, being a young lad with much interest in the birds and bees, these “oohhhs” and “ahhhhs” were pretty distracting.

Looking around I could not spot the source of all such sighs, indeed there were all these canvases of Sabavala, that’s all. It took me a bit of while to digest the fact that these arty sighers were actually being moved by the art on these canvases, the paintings apparently were creating the emotional upheaval. Now and then, I could also spot a man standing in front of a work, staring at it the way people must have looked at Mandakini’s bosom underneath that white saree in that Ram Teri Ganga song. They would ogle at the voluptuousness of the form, put their hands over the eyes thereby creating artificial blinkers and gaze on in stark wonder. Sometimes a singular work would move them so much that they almost seemed at the verge of an emotional breakdown.  It seemed to be an exhausting experience like at the end of a Vipasana session at a Osho commune. 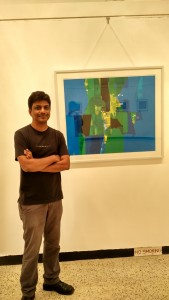 Impressed by the sheer emotions flowing through the room, I sallied forward to discover, unearth and understand the source. And so, I plonked myself in front of an artwork that moved many who glimpsed at it. At first glance I could make out nothing, it just seemed like a senseless hotch-potch of colours, the kind that happens when Jr. KG kid is forced to paint by his parents and the kid just wishes to take revenge on them. It was a terrible mess, there was no definitive shape, the colours overlapped, frankly, you could not make a dickens of what it was. I like looked at it again, tilted my head first left and then right and looked again, went back, came forth, cupped my eyes, stared at it with vengeance. In short, tried everything and yet could make out nothing. I moved from one canvas to another, and all seemed to me an extravagant mess. It is not that I did not try hard, I earnestly did, but yet the beauty of all these artworks seemed to elude my sensibilities. Guess, having grown up gazing at calendar art of Raja Ravi Varma at home, or those beautiful line works in Chandamama, or even the amazing art-panels in Amar Chitra Katha by Ram Waerkar.  For me the purpose of a drawing was to convey a meaning, you know a frame that encapsulates a thousand words, there was a reason why it existed. Mario Miranda’s toons tickled me, while Laxman’s work made me think. Even MF Hussain’s work (who I had met at the premiere of Gajagamini) seemed to hold some promise or a glimpse of thought. Strangely Sabavala’s work lacked all this and yet it seemed to evoke such spontaneous appreciation, it surprised me much. A large part of it seemed fake, you know, those arty-farty types reacting in rehearsed acts. But even so, there must be something inedible or intangible that could not be captured in words an yet was much evocative. After a few attempts at trying to discern it, I gave up. Also since no samosas (forget croissants) or even Thumsup (forget wine) seemed to be on the way, I quietly slinked away, leaving the sighing ladies and the haughty artists.

Standing today, in front of Gajanan’s artwork, I seemed to be lost again. 15 years later, I was in the same place, and caught in the same grind. Lost in front of the abstract, it 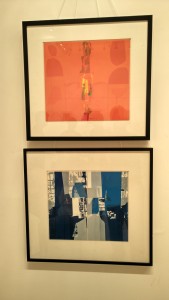 seemed like another battle lost. But after a brief conversation with Gaja, I realised that the more I tried, the more I’ll fail.

So, I stepped back, coaxed the brain to relax, and tried to look at the vivid tapestry in a new light. To be fair, it was much harder than said and I struggled yet to not try to make sense. But, then given some time, it started to happen. The patterns slowly merged into one another and disappeared and what remained were hues, and shades. Can’t say that much enjoyed the experience but, yes it was indeed a beginning.

“Our culture encourages us to think and imagine in definitive patterns, my paintings are but an attempt to be able to break out of them. There is no big thought, no idea, just art for the sake of art,” stated Gaja; he seemed much mollified by then.

Indeed our fastidious nature that compels us to find patterns and consonance in every aspect of our lives, from office to home, from work to play. If only we can break free from the rut, we can then enjoy the tapestry of life that has among the many things the sticky wariness of a cello tape. Believe me not, ask Gajanan about it….