Mornings are an altogether different thing in Mumbai. Unlike the “subehe Kashi” (morning in Kashi), where mornings are king of romantic and melodious, in the urban sprawl of Mumbai it is anything but that. With scores and scores of Mumbaikars (good tens on the roads and on the run, there is no respite, calmness or freshness to be sought in the morning. Sanity is dependent on precise minutes like 8:15 F, or 8:47 S. Omens, good 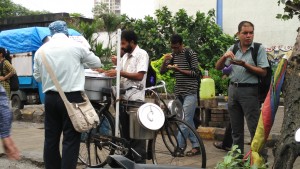 or bad, are all about whether you were able to find a seating place in the train. Chivalries and niceties are easily dumped, when you need to jump a queue and duck into a share auto, even before the lady, who has been patiently standing there for well over 10 minutes. Thus, mornings in Mumbai are chaos supreme, with blood pressures soaring and people zipping from one point to another.

In the very midst of this madness, there are little oasis of peace and tranquility that abound across the city. And the best thing is that these oases are mobile and agile, travelling along on the back on a bicycle. These are the Breakfast Annas of Mumbai that feed a huge population on the run. 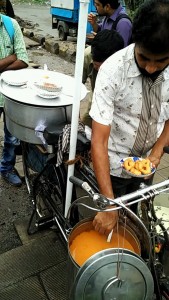 with their meduvadas and idlis (at times even plain dosa). Quickly consumable and awesomely cheap, these Breakfast Annas are an essential part of Mumbai life. People waiting for a bus or a rickshaw, will quickly converge at these anna-spots and savour the goodies. For 10 bucks a plate, you can wallop down 3 small meduwadas or idlis and continue on. These annas are like small pit-stops for the people to come and charge self before rejoining the rush to work.

One of the things that truly amazed me over the years was the apparent standardised fare that is similar across the city. The idlis, the vadas, the sambar, and even the chatni taste almost the same all across. You move from one area to another, and yet the taste more or less remains the same. It took some investigation and journalistic prodding that I discovered the reason. Typically, the annas seem like householders, who are retailing homemade fare. But then, nothing could really be further from the truth. All the food stuff is actually mass-produced on a factory scale at different designated areas like Dharavi and thereon. The Breakfast Anna are merely retailers, who buy a designated quota everyday and cart it all over the place. This in short, is the reason for the uniformity. These annas are not the creators but merely smart vendors of the fast-food fare.

To be fair though, vending on the bicycle is much hard work. You have to brave the rain and shine, the traffic and tide, and the worst-of-all, the hafta-vasuli cops, who will not only eat plenty from your pot, take parcels, and then ask you money as well. Many years back, I had myself witnessed a cop thrashing one anna for refusing to part with money; he hammered him with a stick, and then demolished the bicycle. These poor annas have to brave all that.

But what happens post breakfast, you might wonder? Well, come evening these Breakfast Annas transform into Coffee Annas, and on the same cycle sell piping hot coffee and a host of other things like cigarette, gutkha, and so on. Typically these annas work in two shifts, from morning 8am – 12 noon, selling all the breakfast fare, and from 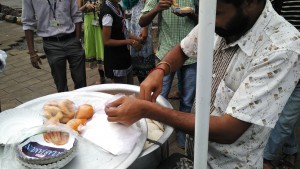 night 9 pm – 3 (or even 4) am, selling coffee. One a good day, our entrepreneurial anna can easily make a sale of a few thousands and profit by say 1-2K. But then, it is a tough thankless life.

So, the next time you are in a terrible rush to catch a bus or train, and decide to fill up on some quick meal, don’t forget to smile at the anna, that man has been at it through the night possibly first selling coffee and then idli. And while you do pay him for the food and drink, there is no compensation for his heart and grit. Be nice and talk decently to him, ask him about his day, and where he lives, and so on. Believe, me he will really feel good about his life.