While I much respect and admire the kind of work Devdutt Pattanaik is doing in bring Indian mythology to the fore, he has written numerous books and spoken at various TedX events on the same, yet I am much disappointed by his latest post on qz.com, titled “Here is what they don’t tell you about feminism and sexuality in Hindu mythology”. It is a well-written piece on a well-read website, yet at the core of it, it makes a lot of errors not only in terms of judgements but also on inferences drawn from them. The very first words of the piece start with, “Hindu Mythology reveals”.  This can be a very dicey phrase to begin 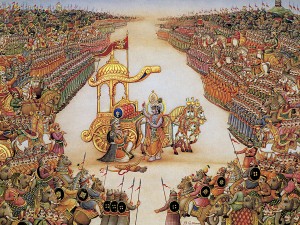 with. You see, mythology by a simple definition is actually a story or a tale. And being one, it cannot really reveal anything; one can only make interpretations of it, to guess what the thought process was in that time when the same had been supposedly penned. Thus, as a corollary, etiological study of epics like Mahabharata or Ramayana are as prone to misinformation, as say an archaeological study is.

Coming to the primary premise of the said piece that talks about a very important issue of feminism and equality in ancient Indian times. The objective is much noble, but then, it starts of in a weird manner, stating that in the Mahabharata, there is an allusion of a time, where “men and women were free to go to anyone, until it became important to establish fatherhood.” Mahabharata is a vast epic that has much in it, like an ocean, where you can dive and find different gems every time. Hence, finding instances that support such inference is not really a surprise. Yet, in the phrase above, the allusion seems to be either on promiscuity or freedom to choose partners in ancient India.

Speaking about promiscuity, the only time I remember something like this cropping up in the Mahabharata is in the story of Uloopi & Arjuna, where she openly asserts her physical needs (read craving, lust), and demands to be ‘gratified’. By this account, or a few stray one like these, one cannot generalise that the societal norms during the time were very different. I mean, Kunti was properly and religiously wed (arranged marriage), Draupadi was married by common practice (Swayamvara), even Dushyanta when he courted Shakuntala, he married her according to the Gandharva vivaha rites (which were pretty common in ancient times, as it gets mentioned in the Rig Veda, according to which the girl 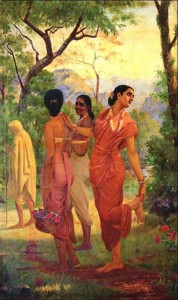 had a freedom to choose her partner). But even here, the distinction is pretty clear, Gandharva marriages was not about polygamous dalliances, but about monogamous relationships, the lady was free to chose and live with the man she likes, it did not mean that she would “go to anyone”. In that sense, Gandharva vivaha is an ancient version of what we know as “love marriage” today. The distinction is pretty clear.

There is an attempt in the piece to bring the topic of equality (or rather inequality) to the fore. Devdutt states that gender discrimination was an ‘unenlightened thing’, as different as soul and flesh. But while bringing out the distinction, he refers to the devadasi, as someone “who offered her body to everyone”, like a common prostitute or something. Yet again, Devadasis were temple ladies, who were meant for the deities and held a very high rank in the society. It was only with the decline of Hinduism in the 9th-10th century, that there stature got a beating, and many must have taken to prostitution of some form to support self. But that does not mean that all Devadasi were prostitutes, or should be referred to as one. It was a corruption of a system, not the design of it by default.

Also there is a mention of how “the invention of monastic orders” led to the relegation of women to the periphery, as celibacy was given importance and women as the temptress was shunned. But then again, in the ancient stories, we had sages like Vashista, Vishwamitra and so on, who led a very normal or carnal existence, without a bother.  The monastic order was more of Buddhism & Jainism idea, thus, it will be largely unfair to 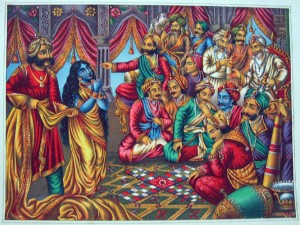 bring it up in an article where one is discussing Hindu mythology, and especially using it as a case to proffer an explanation.

In the end, my only wish was that when someone, so high on the Indian mythological heavens pens a piece so, it must be done with much thought and deliberation. Thesedays a lot of fluff gets thrown around in the name of mythology, and we must guard against it. While, everyone or anyone can interpret  mythology in their own personal way, care must be taken when going to public with it. Every such piece must be backed with proper citations or references to books, versions, etc. The current piece seems just a mechanism to post a ‘nice story’ with an image from Khajuraho temple to prove a point. There is much more to Indian mythology and epics than just then one-off inferences. Am sure, Devdutt knows a lot more of it then I do.