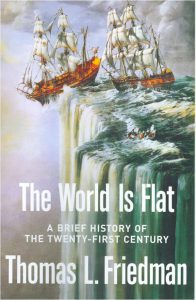 and Mexico for the “greatest jobs theft” in the history of the world. According to him, Indians and other nationals were gobbling up American jobs. Indians were no more a threat, but rather scheming thieves that stole and cheated. Now how could that narrative change so quickly? What happened to that ‘flat world’ that was meant to be equal for all END_OF_DOCUMENT_TOKEN_TO_BE_REPLACED