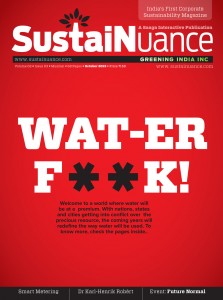 Were we to employ the same drill to the issue of water scarcity that plagues us, even an optimist will not be able to discern the glass as full, or rather half full. It is full-empty in an oxymoronic way. We seemed to have reached a stage that statistics, figures, projections, etc, don’t matter anymore. In fact, from no matter which angle you look at it, we are going to be in a big mess, if we aren’t in it already. It is an issue scarier than we can actually imagine.
Forget countries, even states within the same dominion are battling each other for every tiny water source. The current crisis in Andhra Pradesh over water is a vivid reminder of where we are headed. And when the whole world is going into a topsy-turvy, how can businesses continue as is? When the land is parched, the taps in the company premises will run dry as well. Just, last summer, in Aurangabad, Maharashtra, factories and breweries were shut for months simply because there was no water available. The cost of water is rising by the day, for instance, the average cost of water in Mumbai was `25 / m3 last year and shot up to `40/m3 this year. Businesses need now look at their water consumption from a purely economic purview. END_OF_DOCUMENT_TOKEN_TO_BE_REPLACED