“Abbé aee— first class hain, First. Chal peeche waala dabba mein ja,” (this is first class, go to the compartment behind) is a common refrain that can be heard in the suburban trains of Mumbai day after day. Depending on the time of the day, the tone and the tenor of the words change; it will be irritated and scruff in the mornings and evenings during the peak hours when space is at a premium and it will be calm and brotherly during the afternoon, or late at night when there is much space around.

In 10 cases out of 10, the admonishment above would have been uttered and directed at a person based on how he looks and what he wears. If a man is a short, black fella with oil in his hair and in chappals or slippers, if he is wearing faded shirt and a worn out pant, if he carrying a common bag on his back, a cheap mobile in his pocket; he (don’t know if it happens in a she-compartment) is most likely to be reprimanded so, and reminded of his status in the scheme of trains. In most cases, the man uttering this phrase is right in his judgement, as ridiculed one would look around confused and dazed, and would scamper out to squeeze himself in the ‘other  compartments’ meant for him. In this way the ‘premium’ness of the First Class is assiduously protected. And rightfully too, after all the fares of the First Class are around thrice and more of the Second Class, there are just 3 coupes of First in a train of 12. This economic barrier is what ensures that a corporate executive travels to work comfortably while reading news from a pink paper, and poor peon hanging for his life and trying not to become one. 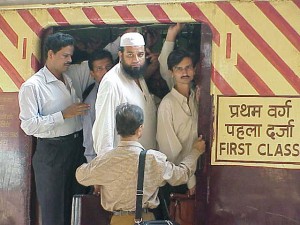 Honestly speaking, there is no real physical difference between the First and Second Class in the suburban trains, at least no discernible one. Both arrive at the station simultaneously, the interiors are the same, and so are the exteriors. Even the seats are the same, and the pattern of seating. It is not as if, after paying a premium you are showered with fresh scented air, or extra leg space or something. Neither do you have the privilege to disembark first or something, like you have in planes. In fact, travelling in either class is the same, what really changes is kind of gentry, and so the attitude of the traveller based on his or her perceptions. Thus, a First Classer is much gruff around with his personal space, they will only seat 3 on a seat that on a supposed to seat 3, unlike in the Second Class, where they always ‘adjust’ 4, and even more based on size of the occupants.  END_OF_DOCUMENT_TOKEN_TO_BE_REPLACED