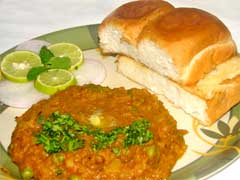 AR Rahman’s music is quite akin to paobhaji and here is why. Listen to any Rahman number on a good headphone and the answer will hit you on the face like a Mohammed Ali knocker. Rahman’s music is composed of various elements, mostly done by a percussionist like Siva Mani or someone. At the very base their will be a constant bland track, say like a hum made by a train when it moves through desolate lands. Next, there will numerous sounds added over it, the bagpiper, the ghungroos, the drums, the pipes, etc. Being a techie, Rahman also used various effects like certain instruments playing on the left, while certain on the right. He also uses the maximum number of tracks in his music, a single track for each of his elements. He also does a unique transition of sound from left ear to right or the other way round. Like a master paobhaji chef, he keeps adding different bits here and there to make the music more nippy and jazzy. The songs composed by him are much sonorous, but it is most likely because of the permutations and combinations of the various elements ingrained within. In a way, his songs are more gimmicky than melody. END_OF_DOCUMENT_TOKEN_TO_BE_REPLACED