Right alongside the mirror in Matoshree’s bathroom, there must be a sticker of the party emblem — the tiger and a placard that would have the words ‘growwllll’ etched on them. The purpose of the two is simply to remind Uddhav Thackeray his lineage, and to imbibe the ‘killer instinct’ in him that the Thackerays are so much renowned for. Somehow Uddhav, the youngest of the Bal Keshav Thackeray clan, was a misfit in the family and hence he needs to be constantly reminded of who he is and what he must pose. The latest episode involving the mud-slinging with Rahul Gandhi and Shahrukh Khan is an illustration of the same fact, the display of false paws.

Some are born great and some have greatness thrust upon them, goes the adage and Uddhav is a living testament to that. Till about 2002, little was known about Uddhav except that he liked photography and yes that he was the youngest  son of the ‘remote control’ of one of the most vituperative Hindu leader. The bespectacled almost impish Uddhav preferred to do his bit, snap tigers in the wild, or shoot forts in Maharashtra from a helicopter. 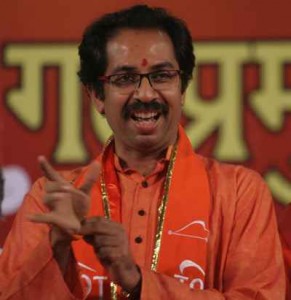 Uddhav, whose name means the brother of Krishna, was quiet happy to lead a non-descript life with his two sons. Since, he happened to be at the vortex of power, he could barely afford the privilege of a profession. So, he was content hosting his photo exhibitions now and then and living it out at his idyllic farm house in Karjat. Unlike his elder brothers, Jaidev and Binda, who were either spoilt by the allure of power or caught in a web of indulgences, Uddhav kept away from both politics and business. In a way, youngest Thackeray seemed to have inherited more from his mother Meena Thackeray, a warm and genile persona that shielded an iron will.

Yet, for all his desires to be away from the dust and grime of politics, he was destined for it. With the death of his brother Binda Thackeray in a car accident, his mother Meenatai in a cardiac arrest and relationship souring between Jaidev and senior Thackeray, his ageing father had no shoulder to lean on, except Uddhav’s. Though, there was indeed Uddhav’s cousin and Balasaheb’s nephew Raj, who had completely imbibed his uncle not only in the way he looked, but also the way he spoke, he thought and he reacted. Raj also had a keen business mind, and was not averse to using any means to achieve his ends. The Ramesh Kini murder case was an example, Raj was accused of threatening and subsequent murder of Ramesh Kini for a real estate deal. Raj over the years, under the aegis of Balasaheb had become the de-facto heir, whose anointment was just a matter of time. But destiny had other plans for him as well.

Once, the Shiv Sena (in conjunction with BJP) had tasted power, they were keen to hold on to it. In fact, before the saffron combine took over the Maharashtra state legislature in 1995, Shiv Sena were just a band of ruffians that were content to terrorise real-estate barons and business people and exhort money from them. But on ascending the CM’s chair, this band of ruffians suddenly realised that the real riches lay elsewhere and what they had been all the time dealing was merely a drop in front of the ocean of opportunity that lay in front. After 5 years in power they were badly itching to be back. Power was undeniably a great intoxicant and now that the ruffians had tasted it, they could not stay away from it.