Back in September 2014, when India’s Mars Orbiter Mission or Mangalyaan had successfully traversed the wide interstellar space to place an Orbiter in the Red Planet’s orbit, there was much celebration, clamor and much pride on the achievement. After all, only a handful of countries had been able to achieve a feat like that, and more importantly our Dragonish neighbor had failed to do that. It was a moment of super-duper pride for Indians, something like winning a Cricket World Cup twice and that too by thrashing the Pakis in the finals by a big-big margin. Mangalyaan was really so big.
Yet, even among the cheer and confetti around, there were a few discordant voices that could be heard talking about things like the usability, feasibility, of a mission like that. 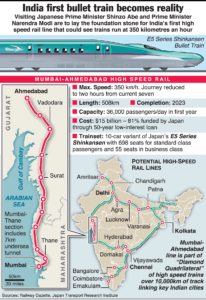 “One-third of Indians don’t have access to regular power or water, yet we splurge money on fancy space missions. Let’s concentrate on the basics, and leave such things for the Americans and their NASA. Kya zaroorat hain yaar!”
Now, this logical reasoning, juxtaposing any project spend with rampant poverty is a favorite bogey of the intelligentsia in India. Sipping duty-free Chardonnay and munching on salamander tikka masala, the irony if their views are never lost in these very brainy folks. The poor-poor chorus had been playing for much too long, like some background music in our Hindi films.
The launch of bullet trains in India has brought out this music again. Everywhere that I see, I am confronted by the sheer analytical and logical reasoning of why bullet trains are an expensive fancy waste, or how the economics is all wrong on this one. Intelligent and intellectual folks are deriding the project on a variety of reasons, from financial to political. All this negative coverage is surprising, after all, shouldn’t we be celebrating one of the biggest infrastructure projects in modern times. Didn’t the naysayers similarly debunk the ₹15000 crore Mumbai-Pune Expressway, and guess what they are doing these days, crying about the traffic jams on the 100 km stretch.
So what’s the bit about the Bullet trains, is it really expensive and unnecessary? Let’s deal with some of the primary arguments against the project on a case to case basis.
At ₹1,10,000 crore, it is a bullet TOO costly
In deed the Bullet Trains are costly. Why else, would so few countries have them and not all. Okies, so we know the story, the Japanese have loaned India some  ₹88,000 crore at some very favorable terms like 50-year time frame with 0.1% interest, a moratorium on payments for 15 years, etc. The rest  ₹20,000 crores will come from India. Now, as Aakar Patel argues on Firstpost, the figure is “three times the size of India’s health budget” and goes on conclude that the Bullet Trains “will be a vanity project, sucking money that could be used for health and education”.
But then, every infrastructure project is always a costly one. Building infrastructure always requires money, it is fairly obvious and simple. To give an instance, here are a few projects with their approx cost in the brackets:
Ever since India’s first Prime Minister Jawaharlal Nehru launched the ₹ 250 crore Bhakra-Nangal in the 1960s, we have been forever evaluating the cost in terms of infra-spend. A nation that will soon be the most populous nation on the planet does not have a luxury to not spend on infrastructure. We need the highways, roads, the metros (the Delhi metro at ₹552 crore per kilometer, it is one of the costliest), as much as we do healthcare and education. Government spending in infrastructure is also a great way to boost sagging

economy, it generates employment, helps businesses, etc. And finally, don’t forget, Bullet Trains are not a social project, they will run like a business, charge a premium, etc. Given the favorable terms of lending, the overall cost is quite justifiable. The big worry is not the initial assessment but rather the cost overruns. Almost all infrastructure projects in India are delayed and exceed the projections if the Bullet Train go through the same rigmarole, then it will turn unfeasible and costly. The best (or rather the worst) instance of this is how India acquired INS Vikramaditya, or aircraft carrier Admiral Gorshkov, from Russia. The initial cost was some ₹6000 crore, but instead ballooned to ₹ 16,750. For a decommissioned aircraft, this was a much higher cost to pay.