At some point in time in our cyber lives, each one of us has encountered the Nigerian 419 mail. Namely, a mail that comes from some old bank employee or a widow, that promises huge sums to the gullible fool that does not dump the mail into the trash bin.

The scamsters, which in spite of their rather mundane modus-operandi, are pretty much successful and account for millions of dollars in fraud each year. One of the reasons behind their high success rate, is their 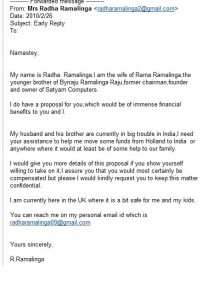 adaptability. So when the US invaded Iraq, their were lot of messages coming from the Baath Party, or even from Afghanistan. The Nigerians are pretty well aware and out there to con you.

So, when my friend Nelson Johnny sent me a forward from Mrs. Radha Ramalinga, I was much amused. The text was strikingly similar to the Nigerian 419 scams. The same bait, the same hook and the same story. Some preliminary Googling on Radha Ramalinga revealed that the con mail has been around for some time, with many people reporting about the same. Also the fact that Mrs Ramalinga is a real person, was another interesting bit.

Somehow, I feel this mail did not originate from a cyber cafe in Lagos, but some where in Ulhas Nagar in India. The look and feel of the same give a very ‘Indian’ touch to the mail. Though on closer inspection one finds that the Namaste spelling is incorrect and there are quite a few typos, namely no space after comma. Also, the mail id provided for future interaction is slightly different from the one the message originates from.

Nonetheless, I have high regards for Ramalinga Raju as a con artist, his corporate swindling should be studied like a case study. In fact, I had written a piece on it earlier, “Why demonise Raju?” (http://shashwatdc.com/2009/01/why-demonise-raju/). And now receiving a con mail fron someone purporting to be his sister-in-law, I really felt good (though I need to thank Nelson, but whatever).

So, if you have been unlucky till now in receiving the mail, here is a copy of it: Raju420. END_OF_DOCUMENT_TOKEN_TO_BE_REPLACED