Just as Florencio Avalos walked out of the Fenix, a rescue cage that brought him up some 700 metres below the earth from the San José copper-gold mine in Chile, his eagerly waiting son hugged him hard. Not only Avalos and his family, but also the Chilean population and 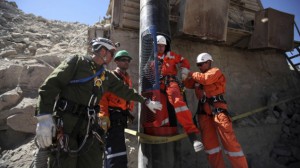 the world at large heaved a big sigh of relief. Avalos  marked the end of a 69 day wait that started when there was a collapse in the mine in which they were working in, entrapping 33 men 2300 feet below the Earth.

Entrapped in a 50 square meter shelter, the miners lived through the ordeal and worked as a cohesive group. In fact for the first 17 days, they had no contact with the outside world, and no one knew whether there were any survivors at all. Yet, under the aegis of senior and experienced miner, the rest did not lose hope and started to ration the limited food they had on hand.

On August 22, when the miners stuck a note written in a red marker to a probe, the world came to know about the survivors. And subsequently, the heaven and earth were moved, quite literally, to rescue these miners. Mining accidents are quite common in Chile, but the gods were kind on these miners and the story ended on a good note. In a strange quirk of fate, the gods were kind once more in the

past, some 38 odd years ago. In fact in some strange ways, the story of the Copiapó mine rescue has an unique parallels with an event that took place 38 years back. Popularly known as the Miracle in the Andes, the accident occurred in 1972, in the the world’s longest continental mountain range, the Andes.

Back then, a win turboprop Fairchild FH-227D flying under the Uruguayan Air Force insignia, crashed in the the Andes. The plane was ferrying Old Christians Club rugby union team from Montevideo, Uruguay, to play a match in Santiago, Chile. There were 45 people on-board including players, crew and their families. After a frantic search over the arduous terrain of Andes, the search was abandoned and the passengers given up for dead. But unbeknowst to them, the plane had crash-landed and while 12 of the 45 passengers died instantly, the rest survived. But the condition of the living was worser than that of the died. END_OF_DOCUMENT_TOKEN_TO_BE_REPLACED