First things first; let’s say a small prayer to whatever powers that be — up there and down under — that Lion didn’t win any ‘Oscars’ at the 89th Academy Awards. The Dev Patel starrer had been nominated for 5 of them, namely, Best Picture, Best Supporting Actor, Best Supporting Actress, Best Music, Best Writing, and Best Cinematography. Thankfully it won none.

Had this movie won any awards at the Academy Awards, we would have been badgered with “Indian-ness”, despite the fact that the movie is produced by a foreign studio, directed and helmed by a foreign crew and even the actors (except for a few tit-bits and the chief protagonist) are all foreigners. 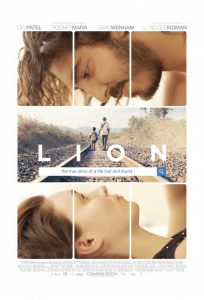 Yet, the foreign DNA of the film is not why I wish the film the failed, there’s no pseudo nationalism at work. The reason, I harbour such feelings is, because undoubtedly Lion is a much below-par movie. The whole excitement around it has taken me by surprise. Built largely on the Slumdog Millionaire construct, Lion is purported to be a true-story. Sadly it is little else but a stereotypical production that lacks empathy or understanding on the topic or the people that it portrays.

Ostensibly, Lion is a tale of a 7-year-old boy named Saroo as he gets separated from his family and brother, travels some 1200 kms unknowingly across India before landing in Kolkata, and is finally adopted by a set of parents in Tasmania, Australia. After a gap of 25 years, Saroo Brierley traces back his past on Google Earth and reunites with his family. This is an epic journey that has its bearings in truth.

In real life, Saroo retraced his steps in the sleepy town of Khandwa in 2012, and his story was well covered by the media at large, from BBC to Times of India, everyone featured this extraordinary human tale of emotions and resolution.

Now, as any astute person, Saroo decided to cash on the new-found fame and he quickly penned a book on his own journey, ‘A Long Way Home’. The book was published in 2013, and by 2016, Lion was released. It was all done in a jiffy, so as to speak.

While I have yet to read the book, I did watch the film and it really stuck me as another Schadenfreude Millionaire tale that had appeared on screen some years back. What essentially befuddles me is the manner in which India is still portrayed especially by international film-makers; a shoddy, poor, dirty, degraded place where crime and criminals abound. END_OF_DOCUMENT_TOKEN_TO_BE_REPLACED