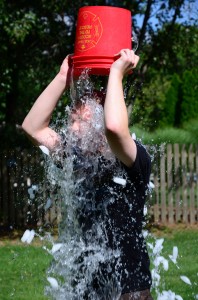 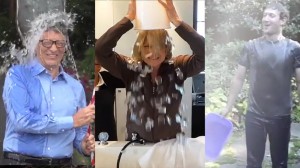 “accept” the challenge, rattle of a few more names, steel himself/herself up, have the bucket emptied over self, smile, shriek or just look bewildered. The length of the video varies from 30 seconds to over 2 minutes, directly proportional to how desperate the person is for publicity. In fact, in many videos the celebs don’t even mention ALS or do it very casually, thereby defeating the whole purpose for taking up the challenge (remember the greater good of spreading awareness).

And, mind you these are not ordinary folks like you or me; these are some of the smartest and sharpest folks on this planet, the virtual who’s who of business. To list out a few names, Bill Gates, Mark Zukerberg, Robert Downing Jr, Justin Timberlake, Satya Nadella, Steve Ballmer, Larry Page, Sergey Brin, Jack Black, Steven Spielberg, Oprah Winfrey and a host of Hollywood celebs. One could not really be faulted to expect such intelligent people to show some modicum of maturity, rather than just doing their bit. The only person, who surprised me with his intelligence, was President Barrack Obama, who accepted the challenge, and opted to make a donation to the ALS Foundation. Am sure, most of the celebs who have taken the challenge must have also made a generous donation to the cause. But then why could not they do it in a manner that befits their stature and not like some kindergarten kids. I mean, imagine taking the name of Bill Gates, Larry Page, and Tara Reid in the same breath, how abysmally dumb is that.

Certainly ALS foundation has managed to raise some good amount of fund, but this could have easily come without the accompaniment of hullabaloo, as it is now.

Finally, there’s this thing about timing. A cursory glance at the papers will tell you that we are living in some very difficult times, close to 2000 people have died in Gaza (many of them were children) in Israeli bomb raids, there were reports of how besieged and starving Yazidi parents were feeding their own blood to their children for nourishment. And if that was not enough, you have the most virulent outbreak of Ebola till date, with over a 1000 people dead in the past few months. Everywhere around you there is death, destruction and mayhem.

Our Ice Bucket Challengers are in a sharp contrast to all this. They live in a secure and secluded world, unaffected by hunger, disease or war. Look a bit keenly at the videos and you will know what I mean, standing on the lawns of their lavish 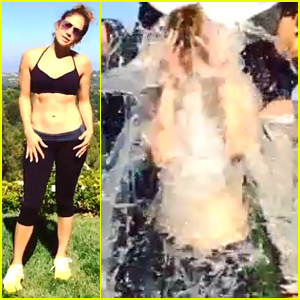 condos, estates, or even resting in a Jacuzzi, attired in nice comfy clothes with attendants close at hand to pour water or hand a towel. In fact, a certain Ice-Hockey player from Canada went to the extent of having his video shot on a mountain with water being poured from a helicopter above. Such an awful awful waste of money and resources, all for making a short video to be posted on YouTube. It kind of makes you wonder, whether the rich, famous and successful person actually live on the same planet as we do. I mean they are so immune to all the calamities, still able to be jovial, indulge in fun-loving banter, when all things are damned. Like that Marie Antoinette from the French Revolution, who apparently advised hungry peasants to eat cake, if they were unable to get bread.

The Ice Bucket Challenge is spreading like a stupid epidemic much like the Tanganyika laughter epidemic of 1962, where schools had to be shut down because 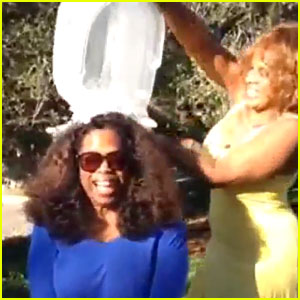 the pupils could not stop laughing. Similarly, some sort of sanity and sobriety should prevail let’s spare a thought for the poor patients who actually suffer from ALS, for them life is not fun like a bucket of water that can be poured and forgotten about. If you don’t believe me, ask one of the most intelligent of minds on this planet, Stephen Hawking. And I can assure you, he will never ever take an ice bucket challenge, because he knows first-hand how debilitating ALS actually is. Let’s hope other intelligent people use their time and efforts more constructively to solve global issues, say like helping formulate the new set of Millennium Development Goals, rather than feeling proud over getting drenched in a bucket of water. Seriously, there is no big deal about it.

*PS: One of my prime concerns is the sanity on Indian shores. I have complete faith in Indian celebs, and to a great deal Indian CEOs, who must be itching to take up the challenge. We make for great copycats, and once this virus spreads, it will engulf all. Though frankly a bucket of cold water is a welcome relief in India’s hot balmy weather, but the show that will accompany the event will embarrass the most resolute of man on this planet. Imagine Poonam Pandey, Rakhi Sawant or even Arvind Kejriwal taking up this challenge. Dread, dread!!

* If you genuinely want to check a video on ALS, check this https://www.youtube.com/watch?v=uDAKAPR-b1E