Bhagvad Gita is one of the most sacred, if not the most sacred of Hindu texts. It has gained cult status, with people from different walks of life, from religious to completely non-religious background emphatically thumbing their support for it. Even the common man is sensitised to its sacredness, what with the oath of honesty one has to take while in matters of courts and law. In that way, it is to Hindus what Koran is to Muslims or Bible is to Christians.

Yet, Gita is not a standalone work or complete in itself, like say the Koran and Bible are. It is a part of an overall epic of Mahabharata. In fact were we to make a size based comparison, it is very small part of the epic, having some 700 verses in a family of some 200000 verses. Nevertheless, Mahabharata is not sacred, but Gita is. I well remember in the past, there was a pervasive notion that if there is a 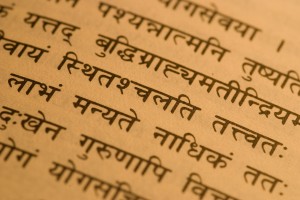 Mahabharata copy in your, there will fights and clashes in the family. Result, not many would keep the Mahabharata copy at home. But Ramayana, and more importantly Gita always find a place of honour in any Hindu god-fearing home.

Recently, while discussing Mahabharata at the Comparative Mythology class, there was this bit about how Hindu epics like Mahabharata and Ramayana had numerous editions of interpretations. Through the ages, these stories have been told and retold, with a little tweak and a little addendum, for instance, Ram in a version of Bengali Ramayana is portrayed as a weakling, while Sita is the strong character (not surprising since in Bengal, woman have been always at the centre of things be it literature Labonya in Gora, films – Charulata (Satyajit Ray), or even in politics like Mamta). Similarly, in a tribal version of Ramayana from Madhya Pradesh, the second brother Lakshman takes a much bigger role, and is central to the theme. Meanwhile, in places like Thailand and Surinam, Hanuman is much more than a devout monkey-follower of Ram. Thus, in every retelling of a tale, there is some embellishment of it.

Mahabharata too has undergone many such interpretations, the story being told from varying perspectives, be it Karna, or Duryodhan (or should one say Suyodhan). There is even one work from the perspective of Karan’s wife. The sheer depth and character of the epic, lends itself to such works.

Gita somehow seems to have escaped from the cycle of interpretations. I mean there is much work and analysis on Gita, but there is not much interpretation. As the lecturer said in the mythology class, storyteller and mythologists always keep a healthy distance from Gita. It makes you scratch your head, as to what could be the reason for it? 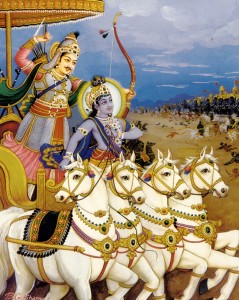 One of the explanations is to look at the nature of the content of Gita. Unlike the interesting milieu of the Mahabharata, Gita is a fairly staid. Essentially, the whole of Gita is actually an elongated sermon, given by Krsna to a confused Arjun, who is sort of dithering before the great war. Right through the 18 chapters Krsna more or less sums up the Hindu philosophy of birth, death and living. While answering to doubts raised by Arjun, Krsna lays the philosophy of divinity namely that of Advaita (non duality) and merges the concept of karma, addressing Arjun (and thereby all of us), to surrender on to him and think not the consequences of action. The chapters are an assimilation of the three schools of thoughts in Hinduism, what are dubbed to be the paths leading to god, namely, karma, gyana, and bhakti. END_OF_DOCUMENT_TOKEN_TO_BE_REPLACED