Reading the excerpts of Sanjay Baru’s book on Prime Minister Manmohan Singh, The Accidental Prime Minister (http://bit.ly/1iawxNv), I am somehow reminded of a cartoon that was done by the brilliantly nonchalant Abu Abraham. Published in the tumultuous period of the Emergency, it shows a rather ungainly President in the bathtub, signing off the proclamation. Indeed, on midnight of June 26, 1975, the office of the President of India was delivered such a body-blow, that it has not recovered even till today. Not surprisingly, the president of the nation, was considered to merely a rubber-stamp, a puppet in the hand 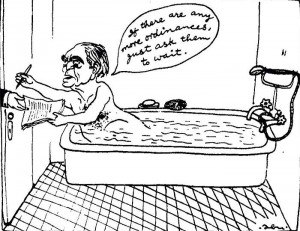 of the government, who signs off the bill, the ordinances, proclamations of Presidents Rule, etc., living off the lard in a cosy colonial palace, the Rastrapati Bhavan. Indira Gandhi, who selfishly wanted to avoid the embarrassment of having to resign following a verdict of Allahabad High Court, decided to enact the most brazen and oppressive abuse on Indian democracy. The rest of the government, including the President, were merely stooges or at-best hapless no-bodies, who could no nothing.

Somehow, the stratagem that was deployed by Indira in 1975, was mastered by her daughter-in-law in 2004, who foisted on a nation a political cipher as a prime minister, just to warm the seat for the eventual transition to her son, Rahul Gandhi. Manmohan Singh as a prime minister in 2004, was as much as an accident as much as it was a design. Just like her mother-in-law, who was under fire for electioneering crimes, Sonia Gandhi was under pressure over her Italian root. The then President APJ Kalam too had apparently raised the issue of her origins, and showed reluctance in ordaining her as the PM. After having burnt her fingers with a thankless PV Narsimha Rao and ambitious Sitaram Kesri, Sonia decided to find a PM that was not only pliable and amenable, but also deferential to the 1st family, and drawing his support from the family itself. Thus by a curious tragedy, in 2004, we never really got a prime minister but rather a care-taker prime minister, someone who was always “caring” the needs of the family and careful not to fall out of favour with his mentors.

While the stratagem deployed by Sonia Gandhi was vintage Congress-stuff, the implications and ramifications were far wider. Over the course of reign from 1966 down to 1984, Indira Gandhi had ruthlessly destroyed all the power-centres that could pose a challenge to the PMO. Stooges were given positions of power, and those who stood in the way were somehow sidelined and cut to size. For instance, not many were surprised when Giani Zail Singh on being made the President had apparently remarked, that “If my leader had said I should pick up a broom and be a sweeper, I would have done that. She chose me to be President!”. Little wonder, when Operation Bluestar was launched, the President did not even know a thing about it beforehand. India was Indira, and Indira was India, truly speaking.

Yet, even though the time when the iron lady was lording over the nation, there was still a sort of culpability, a sense of responsibility. Thus, whenever Indira erred, like she did during the Emergency, the public could mete out a punishment to her, like they did in 1977, routing her and Congress at the electoral hustings. In that way, the Prime Minister was still the head of the government (party too), and the actions paid divided or incurred disdain every 5 years. Sonia Gandhi by installing a stooge, not brought discredit to the office of the PM, but also wielded immense power with no responsibility, as such. This is much damaging to Indian democracy, because now, the person taking decisions is not culpable at all, since she is under the veils of party, ruling indirectly through NAC. Imagine for full 10 years, Sonia Gandhi virtually had her hands on the red button, while an empty briefcase was lying around at Manmohan Singh’s residence.

Indeed, Baru’s account is telling in that space, it shows how the true centre of power was not at 7RCR but at 10 Janpath. I mean, what sort of authority does a PM have when he can’t even select his own cabinet or elect his own team. This complete erosion of the PM’s authority is the reason why, this history will never be kind to either Manmohan Singh or Sonia Gandhi. 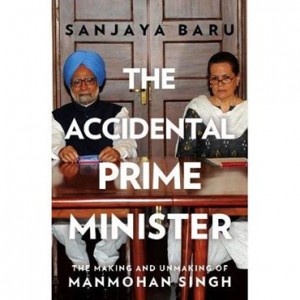 To be fair, ruling by proxy is not a new thing in Indian politics, Lalu did so, by foisting Rabri Devi as Bihar’s CM, or for that matter the way Bal Thackeray “remote-controlled” the government from outside. Yet in both the cases, the power centre was pretty obvious and evident, unlike the case of Sonia & Manmohan, wherein one wielded the power, while other just took on the blame.

The biggest undoing of Prime Minister Manmohan Singh is that that he is a nice man, much too nicer for Indian politics. While none can question his personal integrity, but his ability to promote honesty in politics by his own cabinet members was much under question. Living through a plethora of scams that kept getting bigger and bigger in size and dimensions, and all that the PM could offer was a half-hearted excuse of coalition dharma, or similar absurdities. The PM’s office had become a laughing stock, a synonym of ineffectuality and spineless. The persona that came with the PM’s chair was finally annihilated. The PM was a caricature of ridicule and nothing much. It is only due to Baru’s book that we know the real reason, poor Manmohan Singh had no say on any decision or administrative matter. Imagine, a PM unable to even chose his own cabinet secretary, how toothless he is.

Credit is due to Sonia’s political acumen, she not only ensured that the PM was puppet, but also went ahead and elected another lackey Pratibha Patil as the President. Thereby ensuring complete domination over the affairs of India. Not surprisingly, the period, when two most important positions (PM & President) in India had been compromised, namely Manmohan Singh from 2004-2014, and Pratibha Patil 2007-2012, was also a period when the corruption reached its zenith (or should one say nadir) in the UPA rule. Because the family ruled behind aliases they were able to shelter themselves from the scathing criticism that would have rightfully accrued to them, had they been at the forefront. But instead, now they can take a holier than thou stance, wherein Manmohan Singh is responsible for all the ills, and Sonia and Rahul are responsible for all things good. After all, it is not necessary that great power should necessarily come with great responsibility. In the family’s case, it came with zilch responsibility.

In that manner a dangerous precedent has been put in place, the rule of proxy. We have seen over the years, how the office of the President has been defanged. In fact, it took an upright man like KR Naryanan to show us the affectivity of it. This deliberate derogation is what i 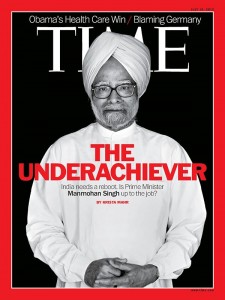 s most telling. While, the family has practiced it all through the time, it attained mastery only under Sonia Gandhi. For instance, Jawaharlal Nehru had serious and grave differences with first president of India Dr. Rajendra Prasad, especially over the Hindu Code Bill, yet Dr. Prasad not only completed two terms in office, but was also succeeded by another illustrious gentleman who went by the name of Dr. Sarvapalli Radhakrishnan. Nehru did not elect a political nobody just to scuttle any competition. Sadly, his tradition was not pursued by his daughter and certainly not by the wife of his grandson. In that sense, the accidental elevation of Manmohan Singh was certainly one of the most tragic accidents in Indian history.

Not surprisingly, in early 2014, PM Manmohan Singh had let out a sigh of hope at a press conference, uttering a belief that “”History will be kinder to me than the contemporary media”. As it turns out, that was a vain hope of a weak PM. Going by the way, the PMO is ridiculing his ex-media advisor’s book or how the party is heaping scorn on Baru, it is obvious that the worker bee will be readily sacrificed to save the first family. Going by the way things function in the Congress party, the interests of the family come before and ahead of everything else. And so, till this nation is governed by the party, so long we will be under the ambiguous monarchy of the Gandhis. In them only, we shall trust (or rather be forced too).