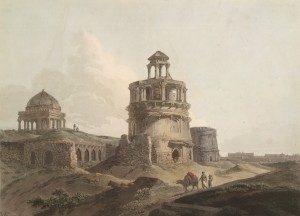 existed. The precise time on the dial is set to sometime in the latter half of the century, somewhere say 1380s AD. The place is Firozabad, not very far from modern-day Delhi, and it’s the reign of Malik Feroze ibn Malik Rajab or more renowned as Sultan Feroze Shah Tughlaq. The Sultan is a septuagenarian man, lording over a dominion that is much weaker and lesser than what his pre-decessor had bequeathed to him. He is a sort of weakling, little in control of things around him. He had succeeded the strong-willed and maverick Sultan Muhammad bin Tughluq, who was most famous for his decree to shift the capital from Delhi to Daulatabad or his experiments with token currency that failed spectacularly. But unlike his predecessor, Feroze Shah Tughlaq was a softie, or a little more of fruitcake. When he took over in 1351, the empire was vast but in a mess. There was much confusion as Muhammad bin Tughluq had died without an heir, and in the ensuing unrest, Feroze was enthroned as the new sultan.

Unlike the warlike Tughlaqs before, Feroze was different; he was merciful and pious, preferring peace to war. He was well-intentioned administrator, who promoted trade within his dominion (FDI). He abolished Octroi duties to promote sales of goods, laid extensive irrigation canals to benefit the peasants. He even created an employment bureau to meet the needs of the unemployed (MNREGA). Created a whole department ‘Diwan i Khairat’ (CSR Bill) to help the poor and needy. And he was also an enthusiastic builder of cities mosque, madrasas, and gardens.

But, he was neither a far-sighted statesman nor a capable general. His moral weakness made him

irresolute, who would wallow instead of face up to situations or people. He was a fanatic, who led many a campaigns against the infidels, putting many to death. To continue his reign, he deliberately overlooked the criminality of the court-nobles, letting the Ulemas have a free-hand and a free run on matters outside their purview. The fact that he was a weakling can be easily gauged from the sheer number of provinces that broke away in his reign, with the regional satraps declaring themselves to be lords. It was an age in which the centre weakened, and provinces like Deccan and Bengal broke away and became stronger.

To consolidate his position, Sultan Feroze reintroduced feudalism, by putting in a Jagir system in the army and land-ownership, making it hereditary. He even indulged the slaves, at one time he had close to 180000 such slaves on his rolls, bleeding his treasury. But he didn’t stop there, because of his weak and
vacillating disposition; he overlooked any corruption or depravity around him. There is that famous instance of how once a distraught soldier had complained to him about how the royal inspector of horses wanted a bribe of a single Tanka at every inspection. Instead of taking the inspector to 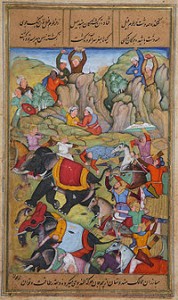 task, the Sultan gave the soldier two tankas, so that he could pay a bribe for the current inspection and use the other for the next inspection. In this manner, he was a party to the debasement of his rule. There’s another story, of how one Imadulmulk Bashir, his minister of war who began his career as an inherited slave, managed to accumulate wealth to the tune of 13 crores, when the state’s yearly income was six crores and seventy-five lakh tankas. Little wonder, then that Feroze Shah Tughluq’s reign has been described as the greatest age of corruption in medieval India.

By the time, his reign ended in 1388, corruption and cronyism like termites had gnawed away at the empire. In fact, just a decade after the Sultan’s death, the Tughlaq dynasty came to an abrupt end, as the mongol tyrant Tamurlane invaded northern India. In retrospect, Feroze Shah Tughlaq was a vacillating weakling who in spite of all good in him, turned to be a bane and a disaster for his people and his empire.

History or historians have not been very indulgent on their assessment about the old and infirm ruler. So, when recently, yet another old and infirm leader invoked clemency from those who will assess his reign in the future, my thoughts jumped several centuries back to the 14th century, wondering if the Sultan towards the end of his reign might be thinking similarly.

The parallels between PM Manmohan Singh and Sultan Feroze Shah Tughlaq make for an interesting study, both were born in proximate regions of modern-day Pakistan, both were unwilling rulers, soft, gentle, and yes,  feeble, shaky and ineffectual in leadership. Both the PM and the Sultan, were responsible for the most corrupt governments of their time, and both were responsible for the end of a dynasty, while in Sultan Feroze’s case it was his own Tughlaq name, PM Manmohan Singh might well have put the last nail on the Gandhi coffin. 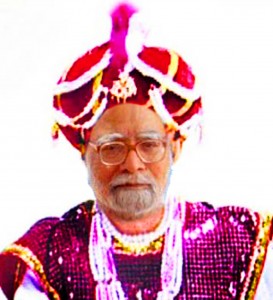 Quite like the old Sultan, PM Manmohan Singh has let corruption prosper under his watch, just because he lacks the moral courage to confront the perpetrators in his cabinet. The resultant anarchy has resulted in slowing of economic growth, inflation, and an endless struggle for many Indians just to meet the basic amenities of life. The India he took over in 2004, is in a worser shape which he will leave in 2014. The ten years of his rule, have given a litany of scams, each bigger than the previous one. And yet, PM Singh seems completely oblivious and unabashed about all that has gone wrong. He is convinced that an unbiased assessment of his rule will show him in a positive light. This delusionary streak seems to be surprising, considering that it was the same pragmatic person, who saved India from a brink of economic disaster back in 1991. The man who rescued India then, is now responsible for ruining it now. As people often say, an over-rated economist and an under-rated politician.

In the end, if only our economist PM read a bit more of history, he’d know that the future is seldom favours the spineless. In retrospect, the consequences of inaction can sometimes seem more ghastly than those of wrong action. It is not the wolf that we begrudge, but the silence of the lambs that we detest. If only, Sultan Manmohan Singh Tughlaq would ponder on how he frittered away a legacy, I seriously doubt he’d not be even able to mumble a nonchalant theekhhain, then..