In the aftermath of the heinous Delhi gang-rape case and the Mumbai gang-rape incident, numerous people were out on the roads holding candles, placards and what not. The media, as it is nature, went into frenzy; solemn anchors asked dire and direct questions. Panels were formed, experts were asked, politicians expressed outrage, protestors ranted loud. Newspapers and magazines too joined the  frenzy, with relentless coverage, sad statistics, and unending stream of visual infographics that drove home the point firm and hard: India is being raped and brutalised; left, right and centre.

Rape, yet again, was the hot potato, right from the panel studios to the living room. Rapes were being reported with amazing regularity from all over the country, foreigners, Indians, no one was spared. Numbers that came out only underscored the point. Here are a few statistics that will scare you: 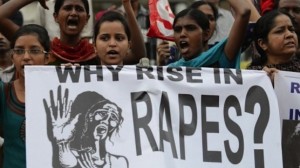 The statistics don’t stop, like an endless stream of data they just keep going on. But what essentially can be summed up is that women in India are never safe, with one being raped every few minutes in some part or the other. The figure could be very high, as it is generally assumed that a majority of cases are never reported out of fear or shame.

The moot question is, how did the affairs come to this end so suddenly? Were we always like this, or have we become so in the past few years? Were the Indian males sleazy, opportunistic bastards all this while or have they become one suddenly?

Looking at the data on hand, there is one thing for sure, crimes against women have increased drastically over the last decade. In fact, the statistics reveal that rape cases in India have doubled between 1990 and 2008. The question to ask then is; what are the major changes witnessed in these years that kind of correlate with the statistics.

But before we get there, let’s spend a little time on the typical points raised by experts as the probable cause for such rampant cases:

Feudalism, chauvinism and culture of patriarchy

Indian males are known to be inherently chauvinistic, when it comes to gender traits. Right from childhood, males and females, are continuously guided on what they can do, and what they should not. Girls are always the ‘weaker’ sex, or at best the ‘fairer’ items, which can be teased, touched, groped, molested or even raped at will. Even when the rape occurs, it is the girl who is “spoilt” and not the guy. Yet, this inherent trait of machismo is quite latent in men across cultures, though varying in degrees. And the fact still remains, this attitude has been prevalent for quite long and can’t possibly be the reason for the sudden spurt in the numbers

Emergence of the new-age ‘social’ woman

“The women are to blame, they are often dressed provocatively,” thunder a lot many leaders in the country, offering it as a sort of an excuse for the spurt. The kind of picture that is implied, is women dressed up in bikinis standing on roads pursing their bright-red-lipsticked lips in the Munni or Sheela fashion. Thus in the end, it is the women who ‘erect’ their problems and pay for it. Yet, the victims of rape are seldom women who are provocatively dressed. In fact, move out on any Indian road, and you will find that almost all the time women (out of sheer fear and dread) are dressed modestly, without much skin show. Now, if wearing jeans is a provocation to someone, the mistake does not lay with the lady, but with the mind that perceives it so. The fact of the matter is, women have indeed broken free of their confines of the kitchen, and are becoming part of mainstream, working shoulder-to-shoulder or calling the shots. Yet again, this is a pitiable excuse for why things are such, and does not hold much weight in the light of how bad things are. 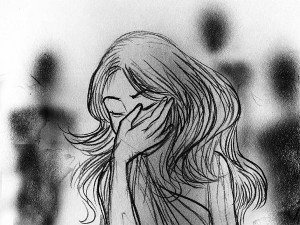 On the FB & Twitter, one of the most frequent posts on the issue of rape is how Indian laws are grossly insufficient to deal with this crisis. Statistics are thrown of how Saudi, Kenya, or even Nigeria deal with rape (forget the fact that all of them are governed under Islamic Sharia law). Protestors and politicians cry hoarse for a tougher law, some even suggesting public hangings or stoning to instil the fear of law in the would-be rapist. Again, if such thing could be solved with tougher laws or higher conviction, India would be a country devoid of crime. Let me give you an instance, India is one of the last few countries in the world that still have capital punishment, just like the US. Though, the convictions have been few, and the hangings even fewer. The fact remains, that the noose has instilled no fear in any would-be murderer, because just like rapes, murders too have been on the upswing. If tougher law resulted in lower crime, than would not there be much fewer murders in India. But the statistics speak otherwise.

So let’s come to the moot point then, namely the what, why and how of the rising cases of rapes. And here are my two contention:

Typically, we humans are trained to find common traits. And even in these cases of rapes, we try to hunt for one. The most common being the religion or region of the accused. Just like all Jihadi terrorists are Muslims, we’d like to find a similar stereotype and lull our minds. Yet, nothing can be further from the truth. The Delhi & Mumbai rapes not only give us an insight on the depravity prevalent in our society, but also hint at something bigger that most of our learned newswallahs or sociologists seem to have missed. Of the 5 accused in the Mumbai case, 4 were Muslims (ostensibly migrants from North Indian states — or Bangladeshi apparently) and 1 was a ‘Marathi’ Hindu. In the Delhi case, 5 were Hindus and 1 was Muslim juvenile from Bihar. This inter-mix of religion is an ample proof that crime and criminality has no religion. When it comes to committing a crime, a Hindu will quietly willingly associate with a Muslim and vice-a-versa. Religion is never a hindrance in such collaborations and neither is it specific to one segment over another. Also, of late, couple of politicians (especially in Maharashtra) for the sake of their personal gains have been putting the blame for crime on certain states and migrants. But in Mumbai rape case, the Marathi fella was as involved with the other migrants, and did not wince out for some supposed empathy for a fellow ‘Mumbaikaar’ or something. Crime is thus region agnostic as well. A criminal can hail from anywhere, be it a rapist from Bihar or a Dawood from Mumbai. Thus, region or religion does not matter when it comes to crime.

Over the years when the cases of rapes doubled, were also the years, when the Indian economy grew by some 8-9%. Apparently, India was shining and raping at the same time. Now how could that be, unless the shining was happening at one end, while the raping at another. The economic prosperity in India has been a very dysfunctional and kind of schizoid in its approach. So, while the fortunes of a few have grown as big as the Antilla, a vast majority have only sunk deeper. The gulf between the haves and the have-nots has widened so much, that it seems like an ocean.

So, you have the strange cohabitation of swanky towers coming up in ‘redeveloped’ areas. Where even a single flat goes for a crore or more, and right outside its gate is a colony of slums where people are struggling even to earn a few hundred a day. This vastness is creating angst, a feeling of revulsion. And as the gulf widens, apparently 2/3rd of India is on the other side, the frictions will turn into direct confrontations. The lower class that has been deprived, will turn depraved. None will be able to stall the resultant slide.

It doesn’t take an analyst to tell you that whenever the population density increases, so does the crime rate. It’s simple, the more the people, the more plausibility of crime. India has been growing at leaps and bounds in this domain. The numbers of people in this land have been growing at rate that would even shame the rabbits. It’s not the numbers alone that should bother us, but where they are growing.

The rising costs of everything have acted like a natural contraceptive for the middle-class, who are having fewer and fewer children than their parents, my grandma had 11 (of whom 4 survived), my parents had 3, and me has 2. And believe me, I am not the unique one, I see this trend pretty pervasive in all my friends, folks and acquaintances. The honest fact is, the cost of raising a kid in India, is ensuring that not many are born. But what if, there was no cost, no responsibilities, no need for planning the future, no need to worry about open-category admissions, or anything  like that? Would that not impel the numbers up. 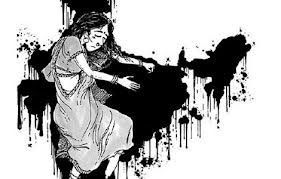 That’s precisely what is happening again in the lower strata, which devoid of education is unable to fathom the trap that it is falling into. A cursory glance at the road-signals or a visit to a nearby slum will make you realise as to where the time bomb is ticking. The way our country runs, ther

e is little or no hope for the many millions that are born year after year in these terrible environs. Devoid of education or empathy, these ‘slumdogs’ turn rabid. And lo and behold, you have a major crisis at your hands.

Elementary my dear Sadly, while every government or minister has spoken about the need of inclusion, our society has been excluding ever more on a year-on-year basis. And the ratio is widening at an alarmingly increasing rate. This demographic explosion will be the single biggest undoing of this nation.

Every prognosis is followed by a prescription. In the case of this malaise too, what could be the solution, the way out. Much to the chagrin of the purple-

eyed optimists, there is none. The way the matters are preceding in India, nothing can protect you from the abyss. The trouble lies in the fact that we are not dealing with the core issues at all, the class-divide and exploding-population. Everything else that you do is merely cosmetic.

The little fact is right there for anyone, there are too many of us jostling for too little. Do you think in this Darwinian cauldron, it will be no holds bar. Crimes, and ghastly ones like the gang-rapes in Delhi and Mumbai, will only rise. All the meek hearts can sit in the studios shaking their heads in disgust and shame, crying for tougher laws, stringent policing, culpability, conviction, etc. But this merely is a symptom, rather an omen, of much worse times ahead.

Perchance, you happen to be from the ‘weaker’ sex in India, try to lose that weakness. Go for martial training, carrying a pepper-spray, in fact carry a whole lot them, and yes pray a lot. In the lop-sided world that you live in, wearing jeans can be an excuse for a leech. Learn to live with the fact that rapes & gang-rapes will rise in India, just try and ensure it is not you or someone you know.