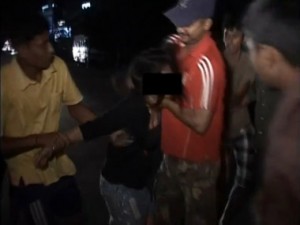 The whole incident raises many question, not the least the role of media in the entire heinous crime. What in the god’s name was the cameramen doing there, recording the whole outrage faithfully, as if it was some National Geographic video, that he’d let nature take its own course. Why did not the cameramen try to intervene, at least make an attempt to diffuse the situation? Why did molestors not react angrily at their video being taken, they almost seemed to be chummy-chummy with the reporter? Did he rush to the police immediately and offer the video as a documentary evidence or was he more interested to take it to his studio? Why did the channel not suo muto reach out to the police, before airing this video?

Sadly, in this hyper-competitive media business, everything is news, and the dirtier the better. To be honest, the cameraman was no less of a hound himself; for him (and the channel) this was a story, not a crime committed against a helpless woman. Thus, he too was party to the crime, and should be treated as one of them itself. The whole incident is reminiscent of another such incident that took place at the other end of nation in 2002. Back then, on a late August evening, a 13-year old girl was raped in a Borivali-bound train in Mumbai, with 5 commuters sitting put. One of the mute witness to the act was Ambarish Mishra, a senior journalist with TOI. Apparently, he was “numbed” when a mentally deranged man start to rape a helpless kid in front of him. As a repentance, he wrote a full-page article in TOI, trying to justify his impotence. It was a well-written piece, eloquent and verbose. But I never could really bring myself to forgive him, not only for his weakness in not coming to aid of a helpless child, but more so, for writing a feature on it that was published on the front page of the very newspaper. Yesterday, when I saw the Guwahati Video, I felt the same outrage. Even today, the mediawallahs are not only incompetent in stopping a gruesome crime, but are also opportunistic in cashing on the same.

What is even more appalling is the awakening of the nation’s conscience. Honestly, all this collective shame and outrage at the Guwahati incident is really funny and hypocritical. I fail to understand, why are Indians so shocked and stupefied on seeing the video, after all we aren’t really living in a lala land are we? Crime against women are as co 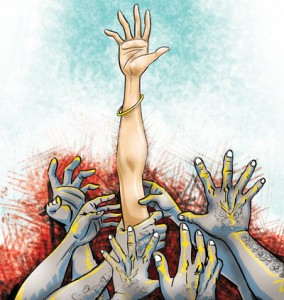 mmon as potholes and filthy drains in India. Did you not know that there is a serious offence (rape, molestation, murder, etc.) committed against a women, every single minute of the day. And these are just the reported figures, the actual ones would be no less than a 100 times these. Look around you, when was the last time your sister, wife, cousin or anyone else had to put up with obscenities in public. Thus, we really live in a land where women are nothing but objects (mast cheez, jalebi bai, sheela and else) that can be used, abused and disused. In that light, I really think, the Guwahati girl was much lucky, she got away much cheaply. With 30 leeches around, its a miracle that her clothes were intact. Probably the camera saved her, as the people were ‘modestly’ trying to cure her immodesty.

Thus, my little advice to all those getting shocked and shamed, stop behaving like ignoramuses, you aren’t some lamb in the woods whose oblivious to the all the going ons. Lets learn to live with the fact, that women are most vulnerable in this uncouth society of ours, and such crimes are common. Just because you see a bloody voyeuristic video, don’t rise from your collective coma and start crying shame shame. Crime, much heinous ones than this, keep happening all around. This is the way the state of nation is, and will be only worser as time passes on with increasing population, that objectifies women. This is the dirty picture, come to live with it. And that is what really will happen.

In the days to come, the hullabaloo will subside and then things will all be as normal as again. The many questions this incident raised will remain unanswered. The most pertinent being, do we need such video to make us aware that our women are leading scared fearful existence? Is this the nation that we were destined to be? Sadly, the shame and stigma will remain, even if the answers are not provided. Did we do anything, when we came to know a 12-year old girl was raped in public? Or that party-goer women molested outside JW Mariott on New Years Eve? Or that women disrobed at the Gateway of India? Did we do anything then? So, how can one expect any different result this time? And why should any one?