“Remember keep your legs straight, run fast and when you reach the edge — look straight and jump,” was Sultan Bhai’s  terse command for me. I would have readily followed his instruction, but for one simple thing, he was asking me to jump of a cliff in Panchgani overlooking a valley, a straight drop of a few thousand metres, enough to make Protinex  out of your bones. But, then, I had willingly chosen to undertake the mission and could only nod meekly in agreement, leaving everything to his good sense. 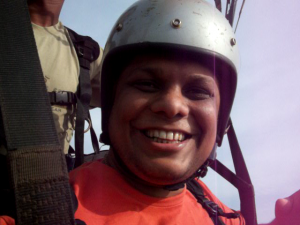 Paragliding is not for the faint-hearted. The human body, for all its evolutionary beauty, is still fairly brittle and can barely take a big knock. So, surviving a fall from a few hundred feet is dicey, forget about a few thousands. Not to mention, there are scores of videos that are available on Youtube,  that capture how things can go horrifically wrong in a matter of seconds. Unlike other sports, the risks are fairly high and you cannot bet on the outcome.

Yet, standing there on the cliff, I must have seen some 9-10 nervous people jumping of the cliff, soaring in the air and returning quite safely to reassure my worried heart. Also the fact that I would not be alone on the trip, there would an experienced hand with me on the sojourn to take care of all the technicalities and also to ensure that after some minutes on the sky, I land safely back on terra firma. Considering my over-healthy frame, my para-guide Babu, waited for the wind currents to increase a bit. His main worry was that once we jump, it should not be that my weight pulls us both down towards certain doom. Hence, I had to wait till early-evening before taking the plunge.

The price for a few minutes in the sky was not cheap. For low-flying 15 minutes, it was 1500 bucks and for high-flying 30 minutes it was 3000. I opted for the latter as I didn’t know when next I will be air-borne, so might as well as make the best of it right now. Before the flight, the guys make you sign a declaration bond, stating that in case of an accident there is none else to blame, etc. Believe me, at that moment the declaration form seemed ominous.

Once, the nitty-gritty were over, I was prepared for the flight. Standing near, the edge of the cliff, a big seat-like bag was ported on my back. Initially, I thought it might be a safety-chute, just in things got out of hand, but it I was wrong. I was fully ‘clipped’ up in a matter of minutes and the para-guide, Babu stood by me, facing the other way.

Yet again Sultan Bhai, the senior most person around, repeated his commands, “leg straight, run and jump”. After the preparation were done, we waited there for an opportune wind current to pick us up. The parachute in the meantime had flared up, and was pulling at me with much force, literally dragging me along. In the wait that lasted a good 5 minutes or more, with an itsy-bitsy helmet on, I was wondering whether I should just pull out of it. My logical self was trying to reassure my brave self that there is no shame or cowardice in pulling out.

While the two within me were battling so, suddenly there were a flurry of words and I was told to run straight ahead. Saying a small prayer, I did run, with the parachute pulling at me with full force. But eventually, as I reached the edge, quite instinctively, I applied the brake. Darn, I could not just jump off. I almost dragged my feet unwillingly for a few feet. But by that time, the chute was all ready to cavort with the wind current. And in spite of my last minute resistance, it just pulled me along.

It must have been a second or two and suddenly, I was in the air. There were a few hundred butterflies fluttering in my belly and as I looked down, I could see the land far-far away. Hanging there, with the wind twirling me like a shorn leaf, I felt easy. At that very moment, with my heart racing, and tummy twisting, I just let go. Looking down, beneath my two legs hanging in the air, a realisation dawned upon 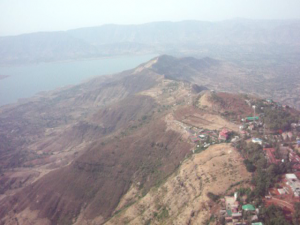 me, I am no more a master of my faith, what ever happens from now on, is my destiny and mother nature to decide. With the wind bellowing in my air, I was acutely aware of my limitations, and how fragile life truly was. In those very moments, I let go.

Sprawled in front of me, was the most beautiful imagery, the river Krishna edging it’s way across the plains, while the green and brown hills stand on guard.  I could spot, ever-so tiny green squares, must be the tilled acres of farmers and small houses down below.The wind was sounding like sea waves, and there was a constant hum. For a few moments as we used to circle the sun in the Western sky would blind us a bit, but only momentarily. For the first time, I could feel things like a bird, unfortunately I didn’t have any of them for company, else I would have shared my happiness with them. I could understand now, why God does not intervene much in the affairs of men, after all, if the Earth seem so wondrous from just a few thousand feet, imagine how composed things might seem from his abode up in the heav3ns. At that moment and time, peace reined supreme.

As we were rising up in the air, thanks largely due to some deft handling by Babu, I had the sudden urge to capture the moments on my camera. Sadly, the camera was stuck inside my denim pockets and I could not simply pull it out. Even if I could, I was unable to let go my hands that were clutching on to the chute to withdraw my camera. I was almost trembling with fear or joy, or both. Mercifully, Babu intervened and pulled out the came from my shorts. And so I was able to make a short video of how things look from 5000 feet. I captured the valley, Pachgani market, Kamalgarh fort and of course the Table-land, it was sheer amazing.

Einstein was much right about relativity of time, as the 30 odd minutes seemed like 3 to me. And just when I was starting to enjoy myself, it was time to descend. According to Babu, we must have touched 5000 feet at the highest. Anyways, with some pulling of chords, left and right and shift of weight, we started our descent. The circles this time were much longer and we had to pay attention to flight path of other para-gliders as well. Nonetheless, the descent was lot quicker and as we neared the cliff, the Babu instructed me to lean back and put my legs up. 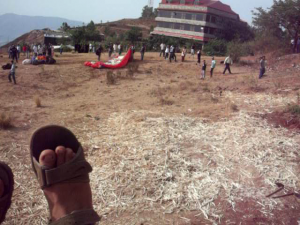 I could see the edge of the mountain nearing, and all the people and cars kept getting bigger. But, the trouble is howsoever I tried putting my legs up, Babu, would tell me to do it more. That’s when I realised the utility of the big strap-on bag, it was for the landing, to cushion the fall. As we neared to land and were a few feet above, I could see a small haystack, that must have been kept for landing. Unfortunately, we missed the mark and we landed a bit further. For all my legs up, the landing was certainly not perfect, and I don’t blame Babu for it. Also, since I was wearing shorts, my skin was bruised and battered in a few places below the knee.

Yet, those 30 minutes in the air, soaring above Panchgani, were some of the best 30 minutes of my life. It was an experience I will cherish, and now, I wait for the day, when I jump off a plane and sky-dive. Till then, Panchgani will always be a found remembrance.

P.S. To see, the two videos that I shot from above and uploaded on Youtube, click the links below: