It was late evening and the little shrub shrugged disenchantedly under the warm shower, much like a kid does when rudely woken up for school. After being drenched incessantly by the Westerlies, the last thing that it desired was warm water to disturb the repose. And yet, for all my concern and respect, I had little recourse but to let nature have its way — out of me. So, after dutifully ‘watering the plants’ or rather a solitary shrub on a dark sidewalk, I felt much relieved and refreshed to continue my onward journey home.

But barely, had I zipped up, a hoarse cry disturbed my nirvana. On turning around, I found out that the person hollering out was none other than a Mumbai cop, and by the way he was looking, he seemed to be a sub-inspector (had a gun holster and no Pandu cap) and yes he seemed much irate and on the verge of fuming.

“Hey kay kele” he said much loudly, even though a few quick paces had brought him much closer to me than before. On seeing my bewildered look, he quickly shifted from Marathi to Hindi (to help me or chastise me). The subsequent conversation ran something like this:

At that point, I did remember seeing the police vehicle — the kind that was bought to fight off the Kasab-types, a heavy built Scorpio with COMBAT etched boldly — parked on the side. But then since, there seemed to be no women in there, and considering that men are often considerate on such sensitive issues, I decided to let nature have its way. I tried explaining it as deferentially as possible. 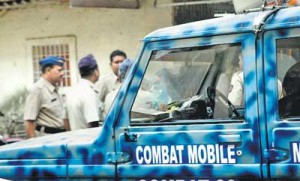 The question seemed more like an accusation, and even though the answer was fairly obvious, I continued lying through my teeth.

By this time, he was in angst not only that I had peed, but also the fact that since I wasn’t conversant in Marathi, it was obvious that I was an outsider or rather a migrant. Now, now, a migrant dirtying Mumbai, no self-respecting cop can bear. So, almost sounding like Gabbar from Sholay, he pronounced.

To make it sound more official, he also rattled off a few acts of law. And gestured to me to get in the Combat vehicle. At that moment, my amusement knew no bounds, after all surely these bunch of cops were posted on that street for some purpose. Right? To fight off someone like Kasab or a Paki terrorist, how could they let a man with a over-flowing bladder disturb them. Imagine, driving me off in a Combat vehicle because I watered myself while it was parked nearby; not on it or over it. Yet, the cop seemed much serious. I tried explaining.

No sooner had I used the word ‘Maaf‘ there was a smirk on his face, the kind every butcher must have when the helpless maaaaah a goat makes before the sharp knife is brought down over the throat. He suddenly became stern and while gesticulating the driver to start the vehicle, went on.

At this moment in time, my friend, Sameer Gore, who was dropping me home on his bike and in a way responsible for chosing the spot of my watering, saw me caught up with a cop and a combat vehicle on his side mirror and immediately rushed to my aid.

The conversation went on in Marathi over the next 5-10 minutes, with HSG explaining my side of the story to him in chaste Marathi and presenting my case, much like the prosecution lawyers do in Hindi films. On finding, that a Marathi (speaking) fellow, endorsed my stance, the cop mellowed a little. His chief grouse was how could I pee in front of the vehicle, it was so disrespectful. And even though, I felt like telling him that had I known it to be so, I would have done it happily, I kept mum. HSG kept pleading and cajoling the cop on my behalf, gesturing me to be mum, in case my Hindi again sprinkled salt over his raw nerve.

Like a good lawyer, HSG, by pleading, and in his own way, irritating the cop, like a housefly does when shooed away with the hand. Finally, the cop, had enough of it and like a great god that even forgives the sinner, told me to buzz off, with a rider though.

HSG and me thanked the cop profusely, and made our back to the parked bike, we both were smiling to ourselves and somewhere I think even the little shrub was sniggering as well, he had his little revenge on the person who disturbed his siesta. Whereas the cop returned to the vehicle, back to his guardian role and safeguard the city in his combat vehicle.