One of the existential questions that I often grapple with these days is whether the friends on my Facebook List are my friends at all? In the sense, from time unknown, I have come to live the idea of a friend as someone whom you know and trust implicitly. A friend is someone you can wake in the middle of night because you have a nightmare and yet expect not to sleep till you have done so.

And yet, the people on my FB, purportedly known as friends are anything but so. They are an assimilation of colleagues, contacts, acquaintances and so on. Over the past year or so, I have accumulated quite a handful of them, some 260 for a guy who can count just a handful in real life.

In the exuberance to spread my wings in the social space, I let my email 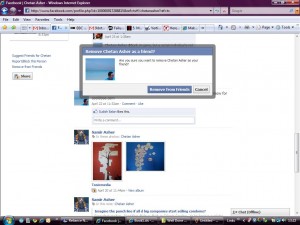 accounts find friends for me and result is, today I have a whole lot of people I know little or none of. It was over the next few months or so of ‘wall’ interactions that I came to know more about them. And in the process, I also came to know much about myself as well. I came to realise that whatever I do, there are certain traits that I just can’t accept in my friends, real and purported ones.

So, over the last few months or so, I have been revisiting all my friends on Facebook, and taking a value-based judgement on a simple assertion: does the person add value to my wall or not. It was certainly not an easy task, but I persisted on it. The result has been that these days I am deleting more people from my list than adding new ones. In the same process, I have come to realise some of the things one should be doing and more importantly not doing on FB.

Thus, here are some pointers on “how to make friends on FB and keep them as friends”.

These are the ‘types’ of status messages that are most common on FB. Usually, people tend to forget the phrase that encourages them to share their thoughts: What’s on your mind? And not, what are you doing?
Justified, that you might be excited about travelling to Zanzibar or catching up with Bono, but have some respect for other people on the list, who would like to believe that they are equally important and your spiel might make them envious. So, once a while, such pronouncements are harmless, but if you make a habit of it, it really makes a lot of people (like me) go YUCK!

2) FB is not a one-way street
Another big issue with people is that more often than not, they will keep posting things on their walls and seldom quip reply or pat on their friend’s wall. Now, if everyone just did that, FB will lose its USP. The idea is interactivity. So, you might be a big CEO or head honcho, if you have an account on FB and have friends on your list, you should make it a point to interact with them now and then, and else they will have little reason to be there on your list.

3) No Ctrl C+V here
Many people, who are running short of time, tend to just keep propping up links or SMS jokes, thinking that it is really innovative. It is very important to be original on FB, after all that’s how you behave with friends right? While there is no inviolate rule against posting interesting links, make sure you embellish them with your thoughts with them. Or in case you are quoting a quip from Wilde, make sure you credit him for it. Yet, on a percentage basis, if your links and quotes are a bulk of what you paste on FB and then man you really don’t have a mind.

4) Sob…Sob…the world is so bad!
We humans are generally emotional creatures, elated in a minute and despondent in another. But FB is not the place for either, especially the snivelling types. In fact, on my list, I have a couple of perennial snivellers that are all the time whimpering, complaining, cribbing, about something or the other.  Being a pessimist is something, but being a pest is altogether something else. So, if you find the world to be a bad place, well do a Google on Carbon Monoxide Poisoning, it just might help.

5) Gifts, an elephant, a fruit, a jackass …no thanks
Great to know that you are a star farmer at Farmville, or have a whole menagerie of animals, or have opened a coffee shop, etc. Please don’t take it for granted that your friends would like an invitation or some such inane gift from your farm or your coffee shop. While, let me confess, it is not hard to disable all such invitations or gifts, yet, I would really appreciate if my friends would be kind enough and not compel me to do so.

6) Discuss and not debate
You don’t like what is there on my wall, well, I don’t really like how you look Fatso. But do I say it? Similarly, if you have something nasty that you want to say, do a thing, don’t say it. While, it may be much common to banter and bicker between friends, it is not the same on FB, where the world can not only have a look but also participate. Always remember that there is just so much that can be tolerated, and you could be pretty soon cruising beyond the limits without even realising it.

7) When tagging is a sin
I know, I don’t look good occasionally. And if you happen to have a photo of one such occasion and feel like putting it up, do so, but for heaven’s sake don’t tag me at the very least. In my photo album there are scores of these tagged images, most of them from inane applications.  Thus, some discretion needs to be used when using the tag feature, think again if you really want to do it. And in case, you still feel like doing so, think yet again till the thought melts away.

These are some of the things that immediately come to my mind and I have been grappling with. So, if you are there on my FB list, and suddenly discover that you are no there, just read through the list above and figure out what wrong you did. In case, there is none, there is just one more reason why I debunk people: for being a bore. Now, could that be the main driving reason?

One thought on “Why I delete more friends on FB, than adding new ones?”