Salaam from India. I hope you are doing well, which I can well imagine you are, considering that at your age there is so much little that one needs and there is just so much that you already have. Well, to be honest, I have been wanting to write you for some time but I was confused about where to send you the mail, as some said that you were a royal guest in UAE, while a few contested that you were put up in London and the rest assured me that you were very much on your way to India.  It was not until that you took up residency in Qatar, that I wasn’t sure of your precise location. In fact, it is about this precise location that I wanted to talk to you about.
Let me first make an honest confession, I am a great fan of yours and your work. Even though, I cannot imagine ever being able to own a Husain piece (and so do probably 99.99999 crores of Indians), yet there is an unknown 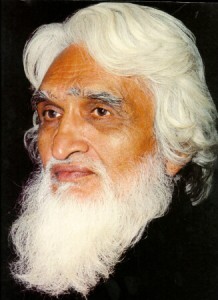 affinity that pulls us to your canvass or any piece that you touch including tablecloths, handkerchiefs and even walls. Probably, it was exclusivity of your work that made it so valuable to us. Sotheby used to auction your work for millions of Dollah. I well remember there was this industrialist that had commissioned a hundred paintings from you for some Rs. 100 crore. Now, it is not every day that a painter gets that kind of money, do they? We all Indians were awed and intimidated by your paintings, even if those stark and blurry figurines did not make any sense.
Also, there was a personal connect for me. In most of your paintings that I chanced across in various magazines, etc. your favourite motif was the horse. White, black, yellow, purple horse with open jaws or mouth shut, galloping or standing still. Even when there was no need for a horse in your painting, there would always be one. For instance, in one of the paintings your muse Madhuri was naked and straddling your motif, a horse. Now that was certainly hard to imagine, considering that Madhuri would never ever ride a horse like that. Nevertheless, I share with you the passion for horses. As a kid, I remember my father taking us to Juhu Chowpatty, I used to love the horses there and would lug at my dad’s shirt asking for a horse ride or even two. Some years later, they stopped horses and camels on the beach, and yet I still loved them and would gallop on an invisible horse often when I was alone. So you see from that time on, I have been very impressed by horses.
I also loved your films a lot both Gaja Gamini and Meenaxi. Sometime back I learnt that you had produced another documentary sort of film in the seventies, but since I was not born back then I could not see it. Anyways, I liked Gaja Gamini even though it made little sense to me or for that matter Madhuri looked a wee bit over weight and over aged for that role. While, I did like Meenaxi, I was lesser confused with it as it did not have those ornate sets like Gaja.
But, then before I could recommend it to my friends or take my family to

view the film, the theatres pulled down the film. Later on I came to know that it was you, who decided to stop the screening because of controversies. I was much saddened by the stance you took when the Ulema council and others objected to some lyrics from a song in Meenaxi. Rather than sticking to your gun and waiving your creative license, as you often do, you meekly submitted to them and stopped the screening of the film in all theatres.  I personally think that you should have stood your ground and let the screenings be disrupted to show how revolting such elements are, who impinge their views on art and culture. But you chose to avoid a confrontation, fairly understandable.
Now that we are talking about controversies, let me touch upon the one that drove you out of India. I am also of the opinion that all the hue and cry raised over your paintings of Hindu goddess in nude is nothing but an exaggerated 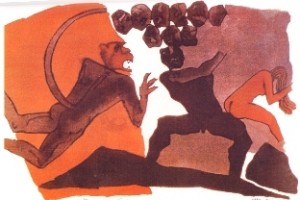 attempt to belittle your work. After all, a nude Saraswati, Laxmi, Parvati, Durga, Draupadi, Sita, etc. is hardly objectionable. Though these deities are worshipped by millions on a daily basis as god-mothers (devi-ma), how does it matter that they are clothed or disrobed. I really don’t see a valid reason for the protests over your painting that depicts Sita naked once on Hanuman’s tail as he sets Lanka on fire and other time when she is sitting naked on the thigh of Ravana as he battles with Hanuman.  Similarly is the case with other deities.  After all wasn’t it the Hindus that composed the Kamasutra or built the Khajuraho temple. Though, actually it weren’t the goddesses that were depicted in different sexual positions, but mere maidens.
In fact, when your name was yet again embroiled in controversy, I surfed and searched for the contentious paintings. I am displaying them with this letter, so as to refresh your memory. At 95, I would not remember my mother let alone an art work.
But, at times, I wonder as to why did you not extend your creative 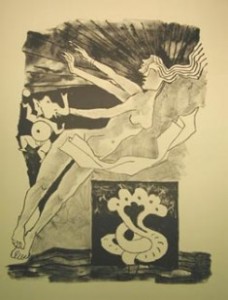 boundaries beyond the Hindu pantheon. If Parvati and Ganesha could be portrayed so, why could not Mother Mary and infant Jesus.  Though, I’d would never advise you to paint on Islamic motifs, considering what brouhaha some simple cartoons in a Danish paper resulted in. Even imagining your nudity and horses on such themes seems blasphemous. Yet, your fascination to portray Hindu goddesses in such a manner really fascinates me. Could it be that, that you are a closet Hindu who is much impressed by the philosophy of the religion and explores the same in such a fashion.  If that is the case, I am sure you must come out with the confession. Or else, at least give a plausible reason for these paintings. After all if one can’t see his own mother nude, why do he disrobe anyone’s else, is the main argument put forth by your detractors.
I can well understand your anguish at the way the saffron elements have gone around thrashing your shows, blackening painting worth crores and pelting stones at your home. In a secular country likes ours, it is completely uncalled for.  Such goondaism is totally uncalled for, especially when one has the legal recourse available.
But then you flinched even when they were carrying out their protest in a legal way, like filing of cases against you. Even as the legal cases were

proceeding you ran off before anything could happen. Recently, I read somewhere that you were perturbed that “India had let you down” and that the cases lodged against you infringed upon your basic right of expression stating that , “It’s a move against art and the artist’s self-expression. I never intended to hurt anyone’s sentiments through art.  I only expressed my soul’s creativity through art.”
So then tell me what is it that you would have preferred? Court cases or mob fury? I am sure you would have liked neither, so would have anyone. But then, how do a significant mass of people who seem to have been let down by your ‘artistic expressions’ deal with you.  If only you could understand that feeling, probably you would not have run away from India.
I really feel bad for you, that at this age and time in your life, you are saddened by your homeland, a place that made you what you are; from a lowly painter of Bollywood billboards to being ‘India’s Picasso’. It has been a miraculous journey, alas, ending so. But then instead of trying to find a way back to your motherland, you have now found a new one, namely Qatar. It is indeed sad that the most celebrated Indian painter is now a Qatar national. Did you ever wish to return, as you had been proclaiming all the time, I really wonder.
The issue here is that it solves nothing. While, the high brow media and the intellectuals might come over to show their support by writing sympathetic 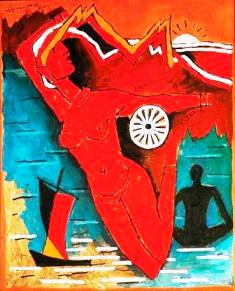 pieces in various dailies or talking about the issue on various talk shows, portraying you a martyr to creativity. It counts little on the ground. By hiding behind a facade of artistic liberty you cannot escape the fruits of your action. You need to own up and make amends for whatever hurt you might have caused. The best way to go would be to show your understanding of the perceived hurt. I think a genuine attempt from your end could initiate the healing process.
Though, truly, I don’t really know why your coming to India is an issue at all. You are well-healed in the international circles, have lot of fans and admirers who will readily open their mansions for you. There is little in this world that you cannot buy, so your being away should be least of the concern for Indians or even to yourself.
Your current state, reminds me of a person from Indian history, Bahadurshah Zafar, the last Mughal emperor. When the Britishers were able to subdue the 1857 revolt, Zafar was exiled to Rangoon, Burma for his role in the revolt. Apparently, the grand old man, who was younger to you by some 8-10 year, used to pine for Hindustan. One of the last couplets that he wrote were really indicative of that pain and hurt.

There is no such pain or hurt visible from your end, in fact you have been belabouring every one, right from the Bharat mata that you painted nude to 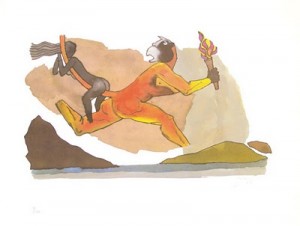 the politicians, etc. Everyone except yourself. Hopefully, as the days pass, you will indeed realise that while such controversies might help you monetarily, they damage the legacy that you will leave behind. If things continue like this, a vast section of this nation will remember you not as a great painter, who rose from the ranks but as a fugitive who painted goddesses in the nude. If that is how you wish to be remembered, that is your choice.
Finally, I wish you all luck in your life, hope you continue to mint millions through your works. Though, how much liberty you will get in Qatar, considering that it follows Sharia, I am not sure. Take care of your health and in moments of relaxation, reflect in an unbiased manner. It just might help.
Namashkaar
An Indian admirer