‘The mountains are Vishnu’s bones, clouds are the hairs on his head, the air is his breathing, rivers are his veins, trees are the hairs of his body, the sun and the moon are his two eyes and the passage of day and night is the moving of his eyelids.’

From the time when I boarded an aircraft over a decade ago, have been fascinated by the sights that one comes across from the tiny glass pane up in the sky. It is nothing less than magical to see giant bridges turn into tiny dots, long railways transform into an micro-toy trains and looming sky scrapers mere indentures on the landscape. Even after scores of trips over the Indian map and other ones, I still take the window seat and keep peeping out, as if there is something else that might just come up. Or it could be someone as well, like say, God. After all doesn’t he (she or even it) lives in the heavens. I have been keeping a watch out for him as well, because looking beneath at the wonderful creation that more or less fits on my palm, my belief in his existence is reaffirmed.

To-date, my most memorable journey was the one I took from Mumbai to Newark, non-stop. The American Airlines plane, to cut the route short, flies over Asia and Europe to the North Pole and then descends over the American hemisphere via Canada. I spent hours peering out in the darkness of the North Pole, could somehow feel the chill of the immense block of ice and the moon kept me company in the vigil. The fact that almost a century and more back there were so many valiant explorers who were racing to the find the North Pole to plant a flag. So many perished in the endeavour and so many just disappeared. And here I was their descendant, flying over the Pole in the comfort of a cosy cabin munching on cashews and sipping wine.

Here is one such journey I made, albeit much shorter and in daylight: from 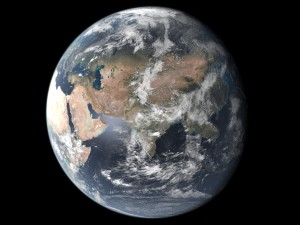 Mumbai to Delhi, on Indigo Flt 6E382. As I was looking out of the window as usual, random thoughts kept popping into my mind (as usual again), with a small difference though, this time I had a pen and paper on which I could jot down whatever came to my mind. This post is a chronicle of the same mind that was travelling at 100s of Kms per hour. Here it goes:

Indeed from up above, the cosmos indeed seems like a manifestation of Vishnu. The chaos, the conundrum, all seems so much frivolous from the top. Imagine if this is how beautiful things seem from a bird’s eye, imagine how amazing it would be from space.