It has been 5 years since Hindi Film industry’s foremost villain, Amrish Puri left for the heavenly abode of Dongrila and Hindi films have never been the same again. He was the last ‘villain’ of Hindi movies and great one, by par. In these few years, his absence has been acutely felt by viewers of Hindi movies. The hero no more seems as heroic as he did in the past, simply because there is no villain who can tower over him. He was the epitome of villainy, who merely by his presence on-screen 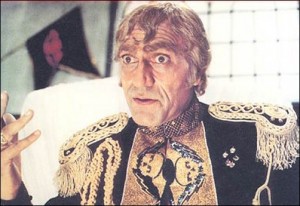 could repulse you or send a shiver down your spine. To be honest, he was the last of the great school of villains, that went long time into the past, having illustrious names like Pran, KN Singh, Kanhaiyalaal, Madan Puri, Amjad Khan, etc.

Let me illustrate this point with a personal example, sometime back while watching the film Ghazini, I realised the importance of a good villain in a film. Somehow, I could not sympathise with the character played by Aamir Khan, simply because the ‘bad guy’ did not seem to be menacing enough. He was bad alright, killing or maiming people like any other villains are expected to. But he was not evil, he was not sinister, he was not wicked. And therefore, the protagonist did not seem to be valiant and gallant. Now, imagine Amrish Puri in the role of Ghazini, the main villain and the contours change completely. Almost instinctively, you start to sympathise with hero even before the film starts that was the power of Amrish Puri.

The reason is fairly simple, unlike the West that tends to see the world in grey and color; we are brought up to see everything in Black and White. So, if it is not good, then it has to be bad, if not punya then paap. Even humans are bracketed into these slots, so if you are not a suputra (or suputri for that matter), you are definitely a kuputra (kuputri similarly). Our allegiance to the good is equally matched by our ambivalence of bad. And so we happily exist in this two-dimensional universe.

Take our scriptures or mythology as well; the villains were in no way lesser in character and charisma than the hero. In fact many times, the bad ones surpassed the good ones with much ado. So, you have the grand image of the Ravana than almost overshadows the genteel Rama, or you have the all powerful Kansa who troubles Krishna for a long time. And not only them we also had a regular dose of villains, from Hirankayshyapa to Shakuni. All these villains were dark, evil and quite charismatic. It almost seems like we have as much as a fascination for the dark, as we have to the good.

This two-dimensional philosophy also found credence on the silver screen, so you had a veritable crop of menacing villains, right from the suit-clad sarcy KN Singh, to the rustic old scoundrel Kanhaiyalal (Chaudhary Gaman Singh) and then there was Pran, who could upstage any hero. They were followed by the peculiar sounding Jeevan (Omkar Nath Dhar) and the Raabert and Mona Darling Boss, Ajit (Hamid Ali Khan). Next came Gabbar, i.e., Amjad Khan, accompanied by sly and lecherous Prem Chopra and womaniser Ranjit. There were a few more like Shakti Kapoor, Gulshan Grover, Khulbhusan Karbhanda, Kader Khan, etc. but they were not of the same class.

And then came, tall, stocky heavy voiced Amrish Puri, who took villainy to a complete new level. His enactment of Mogambo and the dialogue ‘Mogambo khush hua’ are probably the most popular phrase in Hindi Cinema, almost as much as ‘Kitne aadmi the’. But, it isn’t one movie, Amrish Puri went on to make us abhor him in scores of films, like Balwant Rai in Ghayal, Dong in Tehelka, Chuniya in Saudagar, Chadhdha in Damini, Thakral in Meri Jung, Raaka in Qurbani, Bhairon Nath in Nagina. Puri immortalised each of these characters by giving them distinct getup or mannerisms. So, Balwant Rai was very different from Dong or Chuniya, even when it was played by the same man. Even when his getup seemed garish and loud, Puri looked completely at ease and in control. He also reached internationally by enacting the role of thug priest Mola Ram in Indiana Jones and Temple of Doom.

To Puri’s credit, every time he came on screen, one expected something nasty or unpleasant to happen. That was the power of villain, who could easily stand up to the biggest actor be it a Bachchan or a Khan. Indeed, he did some positive roles as well like in China Gate, Chachi 420. But, he would always be remembered as one of the greatest villain.

In his death 5 years back, Hindi cinema lost the art of villainy. Today, the films seem bland, uni-dimensional (almost like the unipolar world after the crash of Soviet Union), where the hero rules supreme and unchallenged. And yet, even has the hero scores over the odds, one is unable to empathise with him, as we did in past. Our black and white films have now become monotone (and thus morbid).

So, in case you are reading Mogambo, please give your ‘meanness’ and malevolence in some Hindi actor, so that we can enjoy our films yet again. Till, then Mogambo khush naheen hoga 🙁

One thought on “Mogambo; miss hua..”