Getting to speak to Mr. G Madhvan Nair is an opportunity that I pride on. Hopefully some years down the line, I will be telling incidents to my grandchildren of how India had made a beginning with space exploration in 2008 by launching the Chandrayaan and how I interviewed the chairman of the agency.

But beyond the historical trappings, Mr. Nair came across as a very down-to-earth person, who took pains to explain the nitty-grittys to me on different aspects. Scientists are renowned to be bored of general journalists, as both talk on different planes. Yet, Mr. Nair, even while he was on other plane, ensured that I at least could understand for myself what he was talking about. Considering the kind of time pressure that he works in, it is no mean achievement. Here is an interview of the man behind India’s moon mission (as it was published in Dataquest).

The Moon and Beyond

On a foggy wintry November evening last year, a 34 kg instrument after traversing some 400,000 kms journey plunged on to the lunar surface and painted it with the Indian tricolour. In its short 25 minute descent the Moon Impact Probe or MIP collected crucial data with its C-band Radar Altimeter, Video Imaging System and a Mass Spectrometer. All this data collected would be critical when the Indian Space Research Organization (ISRO) launches the second Chandrayaan mission that would carry with it a moon rover. With Chandrayaan, India became a member of a very select club of nations that have planted their flags on the lunar soil. Overnight, the world woke up to the space technology might of India and the nation became a power to reckon with in the arena.

The credit for this success solely lies with ISRO that will complete 4 decades of existence in this calendar year. These years have been very eventful in Indian history, from launching INSAT satellites on Russian Soyuz Rockets to launching ESA satellites on PSLV and GSLV rockets, the transition has been phenomenal.

One of the many people who deserve accolade for ISRO’s success is, G Madhvan Nair, a leading technologist in the field of rocket systems and also the current Chairman of ISRO. Over the years, Nair has played a significant role in development of the space program, for instance he was the project director for the Polar Satellite Launch Vehicle (PSLV) development program. He was   also the director of ISRO’s largest R & D Centre, the Vikram Sarabhai Space Centre, and oversaw India’s Geo-synchronous Satellite Launch Vehicle (GSLV) successfully coming to fruition.  Recently, Nair, who is also the Secretary to the Department of Space and the Chairman, Space Commission, was awarded the Padma Vibhushan, India’s second highest civilian honour. In a tete-a-tete with Dataquest, he talks about how technology is shaping the future of India’s space program. Excerpts.

First and foremost, in light of the successful Chandrayaan Mission, what would you term as uniqueness of the mission in terms of new technology employed?
At the onset the Chandrayaan spacecraft was itself a very complex one. The payload of the mission contained instruments like Terrain Mapping Camera, Hyperspectral Imager, Lunar Laser Ranging Instrument, High Energy X-ray Spectrometer, etc. development of these systems were one of the challenges. But more important than that was the fact that to travel beyond the earth gravitational field to the distance of around 400,000 kms, which were doing for the first time, once we get out of the gravitational field of the earth, the forces that influence the course of the aircraft are very many.  Of course when the spacecraft travels long distance, the telemetry and telecommunications systems all become very important and for the same ISRO developed the Deep Space Network. These are just a few instances of the very many challenges that we successfully faced.

The annual budget of ISRO is merely a fraction of what is available to the US National Aeronautics and Space Administration or to the European Space Agency, how do you manage to stay ahead of the technology curve even by spending less? Do you feel constrained? Or does this limitation compel you to be more innovative?
No, we have actually worked out a very innovative way of developing new systems, pressure of regime of technology denial by advanced nations this has been one of the major motivational factors and our scientists put in extra effort which is needed to achieve self reliance in the area. Of course the basic thing is that almost every skill that is required for space research is available under one roof, so the next result is that our overheads are minimum and since our efforts are also concentrated on a mission mode approach we are able to achieve the results with minimum costs.

ISRO’s geographical spread is across the length and breadth of India, how do you interconnect all these offices, for instance the Physical Research Laboratory in Ahmedabad to the  National Atmospheric Research Lab in Chittoor. What is the role played by IT in networking these diverse centers?
We have satellite connectivity with all the centres, hence our travel is considerably less thanks to the extensive use of video-conferencing. Then we also have other means of data transfer system again through the means of satellite communication. The system ensures that simultaneous research is carried out at various centres. 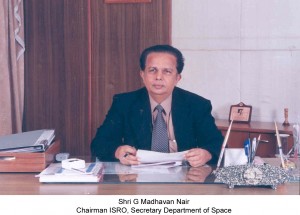 IT& Technology is used in many ways, we have got the mission management computers in the launch vehicle and the satellite, they have been developed in-house including the software and hardware. That is one area. Then of course there is the routine area, as we use a large numbers of hi-end computers for research and every day affairs and for the same also we have developed a proprietary software to solve our scientific problems like Flow solver and complex computational fluid dynamics applications that was used for Chandrayaan, then we have 6 degree of  Freedom, etc. have been developed in-house and used widely at ISRO.

Do you also work with external partners to collaborate on the projects?
Whenever competency is available, we make use of it. But our requirements in terms of technology are very specific and hi-tech having a long gestation time and quite often we draw a blank when we have to look for an external partner.  Most of the times, we go in for design and development in house and if there is a need for repetitive production than we involve an external partner,

One of the other successes of NASA has been its Outreach programme, the way it captures the imagination of the general masses by sharing real-time video on its website, or video-clips, interviews of its scientists, etc. ISRO did something similar with the Chandrayaan Mission, what is your view on the same and what are the future plans?

Specifically speaking from the website basis, we have made a beginning now, the website is not yet very exhaustive one to allow complete dissemination of information. But we do have an exhaustive outreach program in place, for instance we regularly allow students from various schools to visit our centres to get a first-hand experience of our work. During the world space week that happens in October, we organize a whole lot of seminars for both school and college children. We also participate in lots of exhibitions across the country. So we have our own ways of reaching out the people, and we try to do that as many as possible. As far as capitalising on the Internet is concerned, I think disseminating information Web is an ideal medium if utilised properly and we are looking at that as well.

Remote sensing has been another great success story, for instance maps have been made of vegetation cover on a 1 : 250,000 scale. What has been the commercial application of this data and when can we see full-fledged GIS applications for the common citizen?
We are slowing evolving on the remote sensing front. We are in the process of collating all the information that can be shared with the general and intend to publish them in a website. Thus you could see a whole lot of applications coming on that front in the next few months itself.

Technology spin-offs are said to be one of the biggest benefits of a healthy space program, do you think missions like Chandrayaan and the proposed mission to Mars and manned space missions, would lead to such spin-offs? Can you briefly share, what they could be?
We have always made sure mission outcome serves the nation and most of the outcome is serving the society through means like telemedicine and tele-education that is the direct impact. The indirect impact is not really visible, but works nonetheless. We have worked with a lot other organizations in India sharing with them our know how and this has translated in much benefit to the society at large.