It’s evening time at the posh Lincoln Plaza Cinema, in Broadway, New York an Amy Wilder is sitting perked up and looking with disbelief at the film running on the big screen ahead. Though, she has never really visited India, but has heard a lot about the country especially due to the job losses in the US. Like 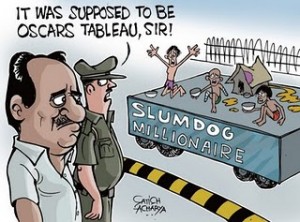 many else she believes that every white-collared IT worker that is retrenched in US is replaced by a brownie in some obscure city of India. Over the years, Amy, and many like her, have come to believe that India is no merely a land of elephants, snake charmers and the rope trick artists, but a potent threat to the workforce because of its laborious and educated workforce. The stereotype had steadily been effaced.

Yet, sitting in the Lincoln Cinema, she witnessed an image of India that she has often heard about but was not sure that it existed; an impoverished country wherein people were reduced to despondency, fighting, bickering, cheating, and killing each other. Thanks to the ‘Incredible India’ buses that flitted on the Broadway Street, her image of India as a third-world country had been replaced by that of an emergent and mystical land, the country of IT and that of the Taj Mahal. But Slumdog Millionaire got her thinking again

Seeing the two little orphans scampering across the cramped and filthy streets of Mumbai made her realize that India was not really a country that should be loathed, but rather pitied. In fact, on coming out of the theatre, Amy felt better about her existence, even though she was facing tough times in the face of job loses and defaults on mortgage payments, but at least it wasn’t as bad as in India, where small boys were blinded and made to beg on streets, or mobs of religious fanatics went about killing people just like that. Thank you lord for not making me an Indian, she heaved a sigh.

Slumdog Millionaire, winner of many Academy awards (and so many others) is merely a poverty porn tale, picking up a morbid story and putting it on screen. While many would argue that the baiters of the film, like me, are deluded hypocrites who don’t want to own up to reality. But the honest truth is, that even the truth that the film purports to show is not the much of a truth at all. Slumdog is a whimsical tale at best and had it been made by an Indian filmmaker, would have sunk at the box office without even a splash.

But then, Slumdog Millionaire has not made by an Indian, but by a phiraang director, with a phiraang crew, funded by a huge media company, Fox Searchlight, that has the marketing muscle to promote the movie in a big way. And most importantly the timing is apt, in a turbulent world of financial meltdown, it feels better to know that there are so many much worse-off, in fact a few billions of them.

Not once, would I deny the fact that the glimpses of Mumbai shown in the movie are untrue, yes indeed there is poverty, rampant and abject poverty. Even as Indian billionaires get profiled in Forbes’ list, there are thousands dying of starvation in rural districts of many states. And yes, Dharavi is filthy, in fact much filthier than shown in the movie. But showing a small kid jumping into the muck of his own making so that he could get a matinee idol’s autograph, is stretching the truth a wee too much. The story and screenplay (that ironically won the Academy Award) is the weakest chink, a story so juvenile that makes me wonder why didn’t earlier films from India replete with histrionics like Lagaan and rest fail to make a dent.

In the end, all I strongly believe that Danny Boyle is a mighty lucky man, that he could gain so much acclaim for so less to show. Meanwhile, the film running in packed houses in the US and else, will surely placate Amy and her likes, that life is not as hard, especially when compared to us slumdog Indians. And rather than being proud of the Academy awards won by Indians, I am somewhat disgusted by it. Slumdog is as much an Indian film as is Love Guru (which by the way was infinitely more watchable), it has Indian stars and crew and is based on Indian life. I am somewhat amazed at the way, Indians are going gaga over the movie, touting it as an Indian success. But then, didn’t we stake a claim on VS Naipaul to be an Indian after he won the Nobel or on Sunita Williams, the NASA astronaut, who circled the earth manier times while working at the International Space Center. How deluded we can really be?

P.S. Schadenfreude is a German term that can be translated as: one person’s delight in another’s misfortune.

One thought on “Schadenfreude Millionaire”