Before I wrote the story on Tibet, I went to Youtube and saw the video of the Tankman, times and again. I remember seeing the video clip as a teenager in one of the television shows, Pranoy Roy’s The World This Week. As, a youngster I was amazed and spellbound by the courage of the man, who stood in front of that column of tanks, waving at them to leave. There hasn’t been an image that has left a mark on me, in the way Tankman had. And every time I was seeing the video on Youtube, I could feel the pain the travesty of the person that drove him to make a statement like that. I often think to myself, was tankman immensely brave aware of the consequences and ready to pay the ultimate price or was just so frustrated that he didn’t bother of anything. And that’s what I recalled when I saw the images of all those monks in Lhasa shouting slogans against the Chinese rule.

Free Tibet, is a phrase that seems to be plastered all across the globe. As the momentum for the 2008 Olympics in China gathers force, so does the movement by Tibetan protesters some asking for autonomy and some for freedom. There have been hot debates, whether politics should be linked to sports. But in all these debate and discussion, what we seem to forget is that around 5 million Tibetans are not only living in the fear for their lives and sustenance but also in danger of losing their identity.

In many ways, this incursion by China into the ‘roof of the world’ could be termed as ethnic cleansing. Sadly, while India has been a host to Tibetan refugees, it can never take a stance for them. So, thousands live into cramped quarters in Dharamsala, dreaming of the day when they will move freely and be able to live in the valleys of Amdo or Kham. It is not hard to understand the pain that the exiled Tibetan community is feeling and can be gauged from the way they are using Internet to connect and spread the message. Using this as an excuse, I did a story on the issue for Dataquest and it was published recently. I am uploading the story in the memory of the tankman (who supposedly is living in Taiwan or was killed within a fortnight by the PRC Army) and more importantly as a salute to the indomitable human spirit that yearns and pines for liberty and freedom. We were all born to be free and that is how we should be.

The struggle for Tibet goes digital

While monks and protesters in Tibet are battling with the heavily armed Chinese forces, Tibetans across the world are using the Internet to connect and rally for their fellowmen back home.

The gloves were finally off, as a column of Chinese Type 59 tanks rolled down the Chang’an Avenue, near Tiananmen Square. It was the spring of 1989, and hundreds of thousands of students were protesting all across China and especially so in Beijing crusading for liberty and free speech. To make their voices heard, students huddled in Tiananmen Square went on a hunger strike. But instead of negotiations, the communist r 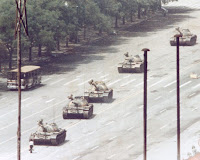 egime of China decided to crush the non-violent movement in the most virulent fashion. Army was sent in to break the protests. The battalion of tanks was part of the same effort.

As the tanks slowly rolled on, a single student decided to make a statement at the very risk of his life. Armed with two empty shopping bags, he stood right before the mighty tanks and brought the whole column to a halt. The tank right in front tried to dodge him, but the unknown rebel (as he would be dubbed for eternity) would not be dissuaded. He gesticulated with his arms and climbed on top of the tank to express his views to the soldier manning the tank. He was not ready to let go, but people (protesters probably) pulled him on the side before something untoward happened.

The whole incident was captured on video and beamed by the channels across the world, making it the most emotive image of the fight for liberty beck in 1989. The images raised international concerns and country after country lambasted the Chinese regime for the brutal reprisal. Other than that there is little that we know of the Tiananmen protest.

The world has changed infinitely much since then. Today China is a global power, both in economic and military terms. The country will be preening in front of the world by the Olympics this year. But there seems to be trouble brewing again, this time in the ‘roof of the world’, Tibet.

Last fortnight, near simultaneous protests started in Lhasa, and then spread to different cities of the Tibetan Autonomous Region. Monks and ordinary Tibetans supposedly attacked Chinese business. People were seen marching in different parts of Tibet, denouncing the oppression of the Chinese military. Once again the Chinese government decided to come down heavy again. The protesters were shot at, and all media access to the region was denied. But unlike in 1989, this time the protesters did not have to be physically present in Tibet to be counted. Thanks to the Internet, Tibetans across the world are taking part in the ongoing struggle.

While China has blocked Youtube and many other chat rooms in the bid to suppress news on the unrest, thousands of Tibetans across the world are using the Internet to connect and spread the word on the real picture on the ground. So when the Chinese officials claimed that the rioting had withered away, videos on Youtube showed the contrary. Also the claims made by officials that suppression was not brutal was shown to be hollow as images of dead monks and protesters were shown on different Tibetan websites.

Google “Free Tibet”, and you will see over seven hundred thousand results, 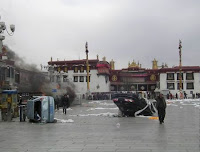 there are around 1500 videos on Youtube on the same keyword, with over 500 added this week itself. Hundreds of pro-Tibetan websites provide links and forums for organizing mass protests against the Chinese rule, the chief ones are Freetibet.org, Tibet.org, Savetibet.org, and many others. In fact Tibetsites.com has a list of all the websites that raising the issue. The Tibetan government in exile has its official website on Tibet.com.

There is also much action on Secondlife.com as well; in fact, there is much talk about the rebuilding the Tibetan Potala Palace as a gift to the 14th Dalai Lama and preserving Tibetan History in virtual space.

So while the denizens within the Great Walls, might come across invalid links and blank pages when they search Tibet in the cyber world. The world outside is brimming with action; there is much talk of how to use the Olympic event as a platform for highlighting the Tibetan cause.

Sometime back, John Gilmore, the co-founder and board member of Electronic Frontier Foundation (EFF) had spoken on the issue of using the Internet as a medium for freedom struggle.

“Every person is responsible to follow the laws of their own country; yet we can all work to change those laws. And when those laws are reprehensible, then passive or active opposition may be required. Mahatma Gandhi provided many useful lessons in how a populace can nonviolently free itself from oppressive rules and rulers. And many technologists have developed ways for citizens to evade information controls that they think are inappropriate,” he had stated.
So, back in 1989, the unknown rebel had to stand in front of a tank to make a statement, the Tibetans now use Blogspot and Youtube to do the same.